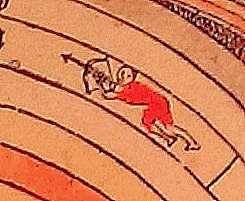 I was intrigued to recently come across a 1493 manuscript that contains a number of the same iconographic representations of the Zodiac as the Voynich Manuscript does, especially the very rare depiction of Sagittarius as a human crossbowman. Let’s have a look at them.

The manuscript in question dates from 1493, and comes from Germany (Nüernburg). It’s called Liber Chronicarum (Nuremburg Chronicles in English, henceforth simply the chronicles) and was designed by German physician and cartographer Hartmann Schedel under commission. It is one of the very first incunabulum (early printed books) and one of the first to successfully mix text and illustrations. It is an illustrated biblical paraphrase of world history that follows the story of human history related in the Bible  including the histories of a number of major Western cities.

In his chronicles Hartmann shows the seven days of creations in seven illustrated woodcuts – and it’s possible that the woodcuts were made by a teenage Albert Dürer, working at this time at the printworks of Michael Wolgemut, the shop that produced these illustrations. Although possibly not the woodcut in question, which is not of the same artistic tendency as others in this manuscript.

The illustration in question is the woodcut showing the seventh day of creation. A cosmic order in which the newly created universe spins at the feet of the Creator. At the centre of the temporal universe we see the Earth, surrounded by the spheres that represent the medieval understanding of the elements (water, air, fire and the ten celestial spheres). The last contains the seven planets (including of course the sun and the moon); the signs of the zodiac which represent the stars – they are not horoscopic in nature here; and two outer spheres, the inner one being termed the crystalline heavens and then the other being the border between the material and immaterial realms. The nine orders of the angels surround the throne of God, and we have the four winds at each corner blowing.

Overview of the zodiac in question

J.K. Petersen has posted on his blog a post that collates and identifies several manuscripts from the 15th century containing the same illustrative traditions of the zodiac, mainly from central Europe. It is worthwhile reading his analysis here before you continue. I do not intend to go into as much detail as he does, but I will concentrate on the most elusive of the zodiac figures, namely the human crossbow figure of Sagittarius, before quickly examining other signs.

I will comment that the depictions of the zodiac as they appear in the Voynich manuscript appear to be part of a move towards anthropomorphising the zodiac signs. As they become more commonly used in central European tradition in the late middle ages there is a shift away from the original divine depictions towards more common and understandable everyday depictions, probably because they become associated with parts of the year that their real life depictions associate with. Gemini become a pair of lovers (spring love, etc iconography); Virgo loses her angelic wings to become a fair maiden (taking her away from the Catholic depiction of an angel); Capricorn is no longer a sea goat but becomes a normal goat, etc.

There are eight other known depictions of Sagittarius as a human crossbowman according to a compilation made by Marco Ponzi and Darren Worley and published on the website of Prof. Stephen Bax. Marco comments that:

These Crossbow Sagittarius images seem to make part of a single tradition: they were all produced in a time span of about 80 years and in places at most 800 Km apart. Yet it is interesting to note how much they differ from one another. The poses are all notably different, with a few exceptions: one of the latest images (the 1475 Bavarian Ludwig-Maximilians University Library 2° Cod. ms. 578) bears a certain resemblance to the earliest (the 1400ca Polish cod. 1842). More clearly, the 1477ca Heidelberg manuscript illustration seems to have been copied from the 1469ca zodiac wheel in Fugger-Bibliothek Cod.5327 Han.

I should note that Petersen was unable to find a human crossbow archer to reference and so is not referenced by Marco. All of Marco’s crossbowmen are from central Europe (modern Germany, Poland) and appear usually in zodiac depictions contained with books of hours, a manual of geomancy; and other assorted hausbuch. A “hausbuch” is an early almanac which offered astrological, calendar, medical and life tips for different parts of the year, and which were designed to be used by estates and households as they progressed throughout the year.

This is interesting, as the Chronicles differs substantially from the others mentioned by Marco. It was published 16 years after the oldest one identified to date (H.1477), although this is still within parameters to say it comes from the same timeframe as identified by Marco; and I understand it to be the only appearing in a printed book. The subject matter of the Chronicles also varies slightly, as this is a printed “history of the world” designed for mass consumption, rather than a particular manuscript designed by a particular local scribe. But it comes from the same era and the same general region as the others.

In short, without delving too deeply into the matter, I would suggest that the artist of the chronicles was influenced by the local tradition when it came to depicting the zodiac signs in this woodcut, and I shall return to this suggestion at the end of this article.

Here are the images of crossbow Sagittarius as found by Marco:

Let us look at the images from the Chronicles in detail:

Let’s look at Sagittarius as being the most interesting.

Here is the Voynich image : 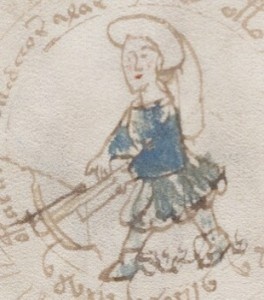 And here is the crossbowman from the chronicles (above we have a collection of images from other sources):

The chronicles shows a human being (with no headdress but wearing a bulky red tunic that is cut off above the knees) lying on the ground holding what appears to be a crossbow. It is perhaps impossible to say whether this is a crossbow or a simple bow, the size of the image is minuscule, but if you look at the way the man is holding the instrument – shoulders straight, the left hand does not extend past the shaft – there is certainly an suggestion that this is a crossbow, not a bow and arrow. There is no attempt to depict the man as holding a normal bow and arrow. The instrument itself also suggests a crossbow, with the bulky arrow extending past the lath into a hefty shaft that is being held with both hands. It is possible that the depiction of the archer as lying down prohibited the artist from drawing a normal bow, as it would be impossible for anyone to draw an arrow whilst lying in this position and the position would be “abnormal”.

It is worth pointing out that this depiction of Sagittarius is meant to depict the constellation, not the zodiac figure.

And although space is certainly limited, it is possible to imagine ways for the artist to depict a centaur here without compressing space, it would not take any more room than the ruminants depicted across the page.

Comparison of the other zodiac signs that compare to the VM

Comparisons that do not match

In short, we have here another Germanic late medieval manuscript which shares much of the same zodiac iconography as the Voynich manuscript does.

Simply as a hypothesis, I note that the images of the zodiac and the celestial spheres are not as well done artistically as the surrounding host of angels. The ram and bull, in particular, are formless with little artistic detail, in opposition to the finer details of the angelic hordes which are on a similar scale. I could surmise that a master engraver did the bulk of the work, and then handed it off to an apprentice to finish off the smaller details such as the zodiac. This apprentice may well have been more influenced by the local tradition he saw in other local works rather than the main body of work