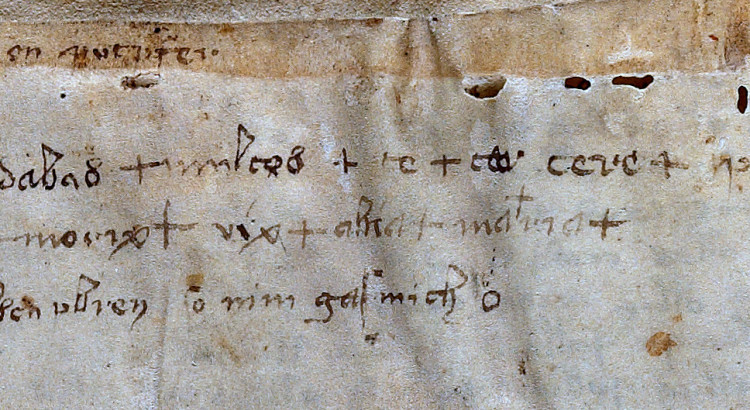 I have written before on my blog about the repair carried out to the final folio of the VM, the “curse” page.

In short, we decided that the top right tear in the final folio was repaired by the parchment maker whilst it was still on its frame (note oval needle holes, a clue that the string used to stitch the parchment was under pressure).

But there is a further consideration to make from this which I am only just starting to think about.

Namely, the wormhole in the top corner (note the two dark circles on each folio): 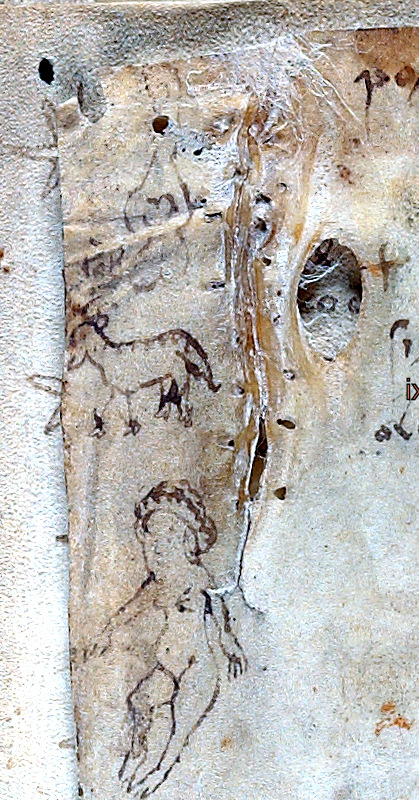 If the folio is spread out to be the same size as the preceding one, then the hole corresponds exactly with the wormhole on the previous folio, as is to be expected. So that suggests that at some point, both folios extended out to the same length, ie, their corners corresponded, and at this point the worm went through both folios.

Which logically means the stitch in the repair had been removed at this point, allowing the page to come out. Probably the string broke.

Now, there is evidence of this repair being again repaired – if you look at the recto side of the folio you can see smaller needle holes amongst the oval ones, holes that weren’t subjected to the same pressure as the original ones. It’s possible that the hair in the folio was thus stuffed back inside its hole and the stitch replaced at some point in its history. The stitch was certainly done before the text on the recto side of this folio was added, because the text takes the repair work into consideration.

The trimming was carried out to correspond with the position of the corner of the folio when the stitch is in place, ie, the top left corner is dragged into its current position. We can postulate that the trimming is not original but carried out by a later owner of the book, one who also repaired the stitch with a quick job.

I’m suggesting that originally that the final folio was the same size as the preceding one, with the top outermost corner being pulled in by the stitch, but the bottom outside corner still corresponding with the folio below. At some point the stitch came undone and the corner drifted back to its original position, at which point the wormhole was made. Now, if the lefthand margin was cut to its current point before that moment, the tops of both folios would not correspond, the top of f116 would be dragged downwards because there is not enough give in the parchment to allow it to correspond with f115 and the wormhole would not be where it is. So we can say the opposite: both folios were originally the same size, with the top outermost corner being dragged in. Take a piece of paper and experiment.

So it seems that when the stitch was repaired – after the inscription on f116v was made – the sewer decided it looked a mess and trimmed this folio to its current size, corresponding with the new location of the corners of the folios. When we look at the preceding folio we see a number of wormholes on the outermost margin that don’t exist in the folio in question, they were most probably the reason it was all cut away – the whole outermost margin was damaged anyway. Other wormholes inside the content of the folio do correspond with holes below, showing the rest of the page lay in its current position quite happily.

And there is one final piece of evidence. The top of the final folio shows water damage, the brownish stain across the whole of the top which has slightly blurred the ink in the first line of text. If the folio had been cut at this point to its current size, the water spill would have carried through to the visible portion of the preceding folio; but it hasn’t, which suggests the final folio was larger at the time of the spill, thus protecting the underlying folio. (Although we can say that possibly the folio was lying open when the spill occurred, away from the rest of the quire. But then we would expect to see some damage to the recto side, which would have been open, and this doesn’t seem to have happened).

The final parchment of this final folio had an imperfection that was made good before the text was written on it. This caused the top outer corner of the folio to be dragged towards the centre, twisting the parchment. Both folios were aprox the same size, as we see elsewhere in the manuscript.

The folio then had text written on it on both sides. But at a later date the repair broke and the corner drifted back to its original position. At some point after this happened, a worm bored a hole through the corner of this folio and the one underneath it.

After this had happened, an owner of the VM repaired the imperfection, and noticed water had been spilt upon the folio. He then trimmed the folio down to the bare margins of the text, cutting away damaged parchment.

One thought to “Evidence of repair and trimming on final folio”