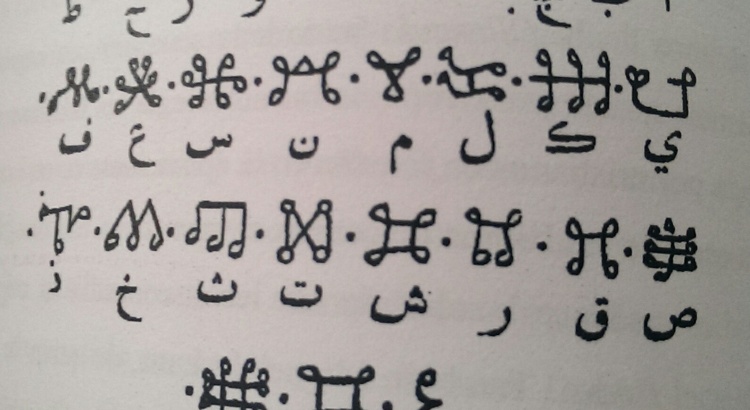 The establishment of the Inquisition to purge heresy and control the Moorish population of Spain by the Catholic Kings was a strong blow to the Islamic heritage of these people. And when Spain outlawed the use of Arabic, these people were unable to continue their heritage in their sacred language.

But then a barrack room lawyer amongst them spotted the loophole – it was Arabic that was banned, not Arabic script. So the faithful continued to use their Arabic script to write in Spanish.

The reasons were simple enough. Islam gives great credence to the calligraphy necessary to write flowing Arabic script, which also has religious connotations. It was simply a question of working out which Arabic letters corresponded to their Castillian (early modern Spanish) phonemes and substituting the Roman characters for the Arabic script.

The first Aljamiadas appear in the mid 15th century on border territory or recently conquered parts of Islamic Spain. They flourished throughout the 16th century before coming to an abrupt end in 1609, when King Felipe III told all Moorish descendants to clear off. 325.000 moriscos were expelled from Spain between 1609 and 1613 (out of total population of just 8.9 million).

Most of the Aljamiadas are copies of pre-existing Arabic or Jewish works of religion, law or moral fiction. However, in the later 16th century original works start to appear, mainly moral literature, poetry or fiction.

There are generally agreed to be three distinct phases to these works. The earlier works are found over both Castilla and Aragon (the two kingdoms of Spain) and last until the forced conversion of the early 16th century. These are mainly reproduction works of tomes that were important to the community. They were written by mudejars, the followers of Islam who lived under Christian rule in the conquered territories.

The second phase starts after the forced conversions, and henceforth mainly vanish from the Kingdom of Castille, appearing instead in Aragon. The Moors who remained after the forced conversion were called moriscos, supposed converted Christians who came from Islamic families. They were treated as second class citizens and carefully watched for heresy by the Inquisition.

The third phase starts after 1609, when the expulsion of the moriscos started. These works continue to appear for the next few decades in north Africa, elsewhere in Europe or the near East, where the expelled moriscos settled. There are even Jewish works written by the sefardís, expelled Jews, Castillian texts written in Hebrew or Arabic script. By now more comfortable speaking Castillian that Arabic, they continued to write in Castillian using their Arabic script.

From the mudejar era, we know of such works as Poema de Yuçuf, (poem of Yuçef), a work from Aragon discussing the XII chapter of the Koran Sûrat Yûsuf. The base language is actually romantic Aragones rather than Castillian. Another work is the 1492 legal tract Suma de los principales mandamientos y debadamientos de la Ley y Sunna by Segovian Sunni muftí Içe de Gebir. The work is a compilation of laws for the mudéjar community in Castille.

The later works by the morisca community are more wide ranging in style. Most of them, as I have said, come from Aragon which had laxer religious Inquisitions than its neighbouring Kingdom of Castille. Many are religious or legal tomes, but original fiction and literary works are also known, which suggest that the moriscos had a vibrant intellectual community going at this period in time.

Notwithstanding that, most of the works we know of have been discovered in hiding places, as all extant copies were destroyed by the Inquisition after the Expulsion. Inside old buildings or buried in caves have been discovered caches of ancient fascinating manuscripts. In the late 19th century there was a craze for hunting out these ancient books, and many Spanish editions of such works were published in the last 1880’s and 1890’s.

Towards the later end of the 16th century a number of “exile guides” are known. Itinerario de España a Turquía or Avisos para el caminante were two popular works which aimed to guide people fleeing Spain.

The National Library of Spain has an online exposition of Aljamiada works (click on Obras if you don’t speak Spanish). What you don’t tend to get in Aljamiada works are great illustrations, the one to the right is about as inventive as they get. The reason being that the works are generally authored by one person, the scribe, and they are intent upon transmitting information. They are often written on cheaper paper which does not lend itself to lavish illustrations.

There are also many magic works on healing or traditional Islamic magic. Libro de los sueños and Libro de los dichos maravillosos were two popular works, the first on the interpretation of dreams and the second on general magic. The moriscos had a good sideline in selling magic charms and spells to the Christians, and many of the inscriptions upon these charms are Aljamiadas, Castillian or Aragonese written in Arabic script.

These later magic works, interestingly enough, continue to use Arabic magic alphabets for certain spells, especially the “great seals” which tend to include spells written in the magic alphabet of the philosopher Colphoterios (which first appears in a treatise by Ibn Wahsiya in the 9th century, although he claims it is a much older alphabet; he also gives examples of other magic alphabets). These magic alphabets, known to Spanish scholars as letras anteojadas (already-seen letters), appear to derive from copies of hieroglyphics, and then are given a one to one correspondence with Arabic script or homophones. However, in many later Aljamiada works, their meanings appear to have been forgotten and they are simple rote copied from tome to tome with no understanding of their meaning – an esoteric meaning has been attributed to them.

Examples of letras anteojadas can be found in Castillian works as well, notable in the 11th century works commissioned by King Alphonse X “the Wise”, in his liber Picatrix or libro de astromagia, all works commissioned by Alphonse to retrieve magic and power from the Arabs scholars then ruling most of the Iberian Peninsula.

The works by Ibn Wahsiya suggest that Islamic scholars developed these alphabets from their studies of Egyptian hieroglyphics and Coptic. It appears that the Shia religious scholars had a tradition of attempting to reproduce and translate these ancient Hermetic works, and that this evolved into the Shia taste for metaphor and signs. The magical quality of such language would extend throughout the Islamic world until they reached Europe, where they formed the first occult languages that promised to unlock the magic secrets of the unknown Islamic world.

Aljamiada works of magic such as the libro de dichas maravillas also contain examples of “salomonic script”, an Arabian magic script attributed to King Salomon. It has been described as a lineal Kufic variant of Arabic, but has the peculiarities of have a straight line joining all the letters together and omitting all diacritic marks, making it difficult to interpret.

There is not, perhaps, a great deal of unique or valuable information contained within the body of Aljamiada literature. But notwithstanding that, it is a fascinating account of how a subjugated and persecuted people contrived to keep their traditions alive whilst paying lip service to the religious laws that persecuted them, and a testimony to the endless inventiveness of mankind.

5 thoughts to “The aljamiadas of Spain”