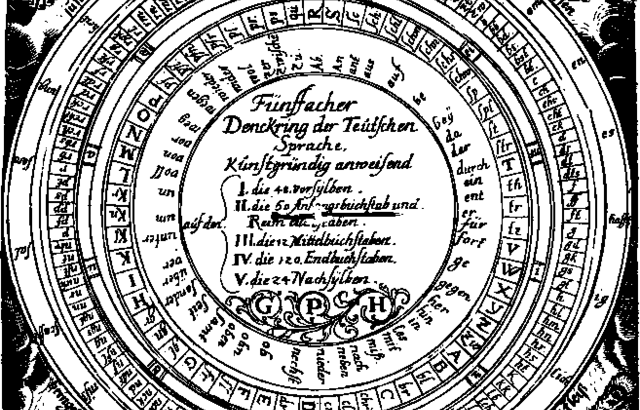 A Zairja is a paper computer used since the dawn of time by the Arabian philosophers. They arrived in Europe most probably via Ramón Llull, the Catalan writer, logician and philosopher who seized upon the invention to make his “ars magna” or “general art”. This later came to be known as Lullian art, a quasi-religious philosophy.

This was intended as a debating tool for winning Muslims to the Christian faith through logic and reason. Through his detailed analytical efforts, Llull built an in-depth theosophic reference by which a reader could enter any argument or question (necessarily reduced to Christian beliefs which Llull identified as held in common with other monotheistic religions). The reader would then use visual aids and a book of charts to combine various ideas, generating statements which come together to form an answer.

Basically, a Zairja is a series of concentric wheels with different concepts on each layer. They were devices to help associated ideas.

The Renaissance called them “Lullian Circles” or Volvelles.

Now, in 1530 Henrich Cornelius Agrippa published an instruction manual for these Volvelle’s in which he claimed his system was “easy to learn for schoolboys and old men alike”. Agrippa later published templates for Volvelles in which the user could spin the wheels to produce poetry or short stories!

The concept continued. In 1651 Georg Philipp Harsdörffer used volvelles to compute the limits of the German languagein his Fünffacher Denckring der Teutschen Sprache, (Five-fold Thought-ring of the German Language). It had  five nesting paper discs, each of which is inscribed with a set of word parts along its edge. The innermost ring contains forty-eight prefixes; the next ring, fifty initial letters or diphthongs; the middle ring, twelve medial letters; then, 120 final letters or diphthongs; with the outermost ring storing twenty-four suffixes. When spun, this simple mechanism can generate German words, producing as many as 97,209,600 different combinations. (Source).

Let’s see. Can we use this to produce Voynich text? I reckon we can. In a way. Not the text. But it could be the random generator that we need to start writing the Voynich Manuscript.

Why would we want to?

Let’s assume the hoax theory. We have to produce text in a fashion known to the 15th century that complies both with Voynich grammar and Zipf’s law. How can anyone do this?

Well, we have the Cardian grille theory. And we have Torstein Timm’s copied text theory. Both have problems for long term text generation, in as much as they don’t comply 100% with what we’re seeing with the VM.

The Cardian Grille theory is too complex. Basically, Rugg had to make it comply with the VM, rather than just leave it as simple as possible. In other words, for his theory to work, somebody wanted to make it in a very specific form, which would indicate a modern day hoax.

Torstein Timms theory works for the body of text, but doesn’t explain away the labels and how the first lines of text start.

Why would this work?

For example, Antoine Casanova (2000), Rules in the Voynich Manuscript, describes a synthetic rule building mechanism for Voynich words from which he concludes:

“The terms of the Voynich manuscript are built from synthetic rules which exclude the assumption from the use of a natural language for its writing. However, the rules which we have put forward could be the expression of a progressive modification, inspired from the discs of Alberti, from the encryption used by the writer(s) of the manuscript.”

To save me reinventing the wheel (ah ha ha ha!) I take Stolfi’s research in his crust-mantle-core theory.

Stolfi has flagged up a very important fact which has so far passed unnoticed by many: the length of the words is exactly distributed around the arithmetical mean with the average word length being 5,5 characters. This is very unusual and indicates a mathematical generator.

A constructed language would not display this characteristic unless the constructed words were of a unified length, something that wouldn’t necessarily have made sense in the pre-computer era. It would make sense if the words were being generated in some fashion (either by an encryption method or a random word generator) as the method used to produce the words would have a simple generator.

Now, my current theory is this:

August 2014 : This is the first draft of this work. I’m still cleaning it up, but all seems to be there. I wanted to get a first draft out in order to tie in with my logical consideration of the Voynich work.

I took Stolfi’s work on the labels and split those on different pages. They all have the same selection of crust mantle core -fixes.

I imagined a Volvelle with these glyphs on them.

We have the outer ring, the prefixes.

The middle ring, the mantle.

The inner ring, the core.

The only thing I had to do know was find out what glyphs went on each ring. I ran them through a script and got them out. Coincided with Stolfi and others.

I then wrote a script. The script assumed the three rings, each with 360º of space on them, and divided the space up to each glyph depending upon their frequency. So more frequent glyphs had more space on the ring (to account for the higher probability of them appearing).

Ran it  a few times and voilá – we had Voynich labels that corresponded to the real set.

4 thoughts to “A simple Voynich word generator, or how it could have been done”