Mojacar features as the image on today’s ONCE lottery ticket. It’s part of ONCE’s profiling of the “35 prettiest towns of Spain” line, which will see one town a week appear on 5,5 million lottery tickets across the nation. Last Sunday was Lucainena de las Torres, also on the list. Not the first time Mojácar has appeared – it was last featured on the 14th April 2008 ticket: 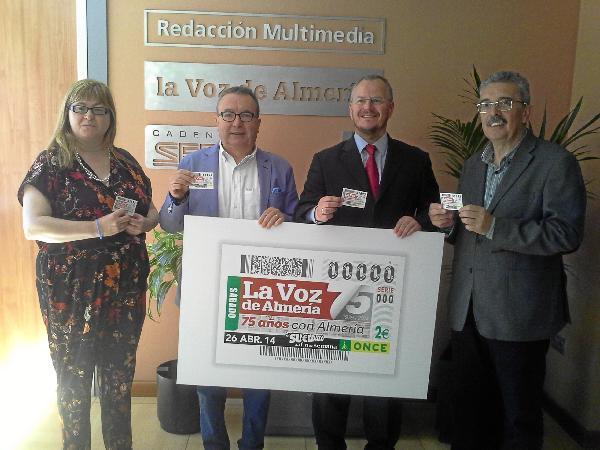 La Voz de Almería, our local newspaper, is celebrating its 75th anniversary, and has been honoured by appearing on this Saturday’s ONCE lottery ticket. ONCE, for those of you who don’t know, is the Spanish Org for the Blind, and raises money via a national lottery. Visually impaired people sell the tickets, receiving a salary for doing so, and the money raised goes towards aid programmes across the country. Their lottery ticket always features a END_OF_DOCUMENT_TOKEN_TO_BE_REPLACED

The ONCE first prize went to tickets sold in Zurgena and Arboleas, distributing 17 million euros across the two towns. One lucky first prize winner got 15 million euros in cash plus 6,000€ a month for the next 25 years, in the annual ONCE Mother’s Day lottery. Less, of course, the 35% government tax on such matters. Juan Fernandez (chap in the photo) was the bloke who sold the tickets. A further nine people won END_OF_DOCUMENT_TOKEN_TO_BE_REPLACED

There is some indignation in the local press that the first thing “El Majo”, owner of a small bar in one of the poorest parts of Almería town, chose to do when he won 9 million on the ONCE lottery last week, was high tail it out of town. It seems that El Majo checked his lottery ticket number on Saturday, let out a whoop of joy, confirmed his winnings with the ONCE people, packed END_OF_DOCUMENT_TOKEN_TO_BE_REPLACED