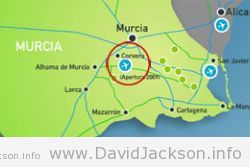 Corvera airport has had a last minute injection of 40 million euros by the Spanish state to stave off bankruptcy after it failed to meet payments on a loan of 200 million euros which is now due. Aeromur, the controlling company for the unopened Murcian airport, had declared intention of bankruptcy in an attempt to force Murcia region to pay the debt. Murcia had refused, despite being the underwriter for the debt. The 40 million END_OF_DOCUMENT_TOKEN_TO_BE_REPLACED

…or businesswoman, of course. I mentioned a few days ago that the Almeria chamber of commerce has filed a complaint with the public prosecutor about its members not being paid by townhalls. It estimated that at least 3,000 jobs in Almería alone have been destroyed over the last three years due to companies going bust because of outstanding debts with townhalls. Madrid has announced that the ICO, the official state credit union, will have a END_OF_DOCUMENT_TOKEN_TO_BE_REPLACED