Two men have been jailed for kidnapping a friend in 2012, holding him against his will in a cave and beating him over the matter of a lost Arsenal football shirt. The man was seized from his sisters house where he was carrying out some work by the two men, before being beaten and robbed of everything he had. He was left unconscious and bleeding in the cave. He later dragged himself out, sought medical END_OF_DOCUMENT_TOKEN_TO_BE_REPLACED

Excitement is growing around “ancient” paintings discovered on the blocks of an ancient stone wall in Aulago (Gérgal) which some experts think may be prehistoric cave art. The paintings were discovered by a local man called Miguel Brocal, who alerted the authorities to their presence. What he was doing levering the blocks out of the wall has not been vouchsafed, one hopes he was simply repairing it. A unit formed of architects, conservators and art END_OF_DOCUMENT_TOKEN_TO_BE_REPLACED 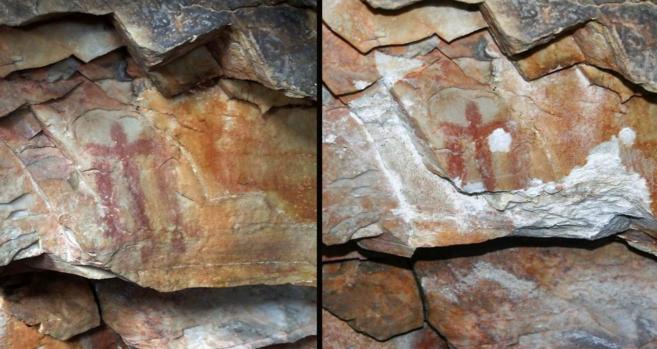 “Los Escolares” is a small cave, so called because it was discovered in 1973 by a bunch of schoolkids on an outing. The kids, venturing into this 1,5 metre square cave in Santa Elena (Jaen), were amazed to find an intact 5,000 year old cave painting at the back of the cave. The painting was later classified as an artefact worthy of being part of “history of humanity” by UNESCO, but it’s never been sealed END_OF_DOCUMENT_TOKEN_TO_BE_REPLACED