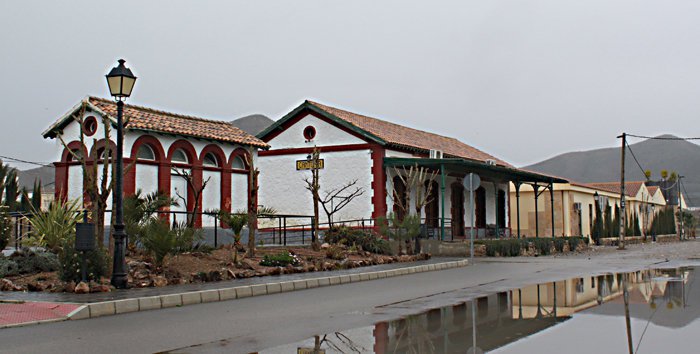 Cantoria Residents Association has closed its doors after many years of service to the ex pat community helping new residents settle into the area, make new friends and appreciate the local culture.   The association, which organised one of the first protest marches in 2008 to highlight the plight of those who had purchased illegal houses in the area, has elected to transfer its remaining funds to the campaign group, AUAN.   ‘Cantoria Residents Association END_OF_DOCUMENT_TOKEN_TO_BE_REPLACED 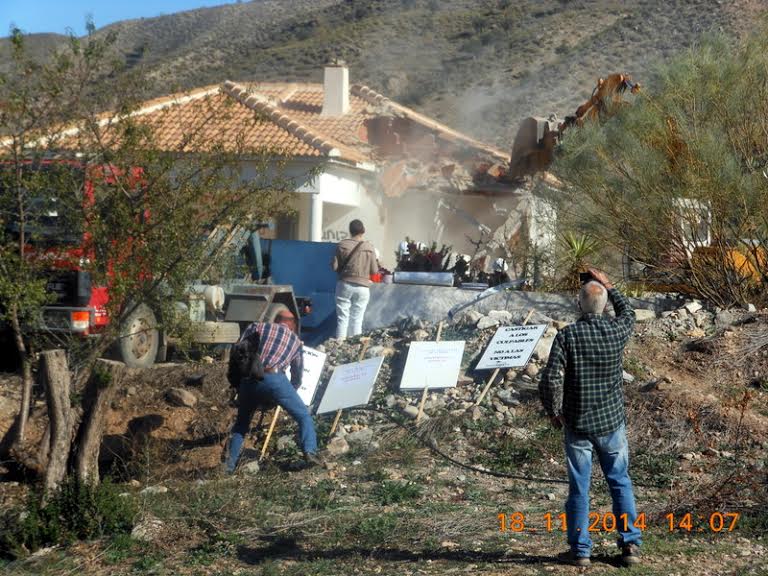 The News agency Europa Press has revealed that a court in Almeria, Andalusia, Spain has ordered the demolition of 17 houses in Media Legua in the town of Cantoria. In the court judgement, to which Europa Press had access, the judge rejected the State Prosecutors request to compensate third party purchasers in good faith because there was “insufficient evidence of their existence”, despite the fact that the British owners had purchased the homes through a END_OF_DOCUMENT_TOKEN_TO_BE_REPLACED

At one o’clock today, 18th November 2014, representatives of the regional government demolished the home of Frank and Janet Dole, in Las Terreras, a tiny hamlet in Cantoria in the Valley of Almanzora. Frank and Janet had purchased the property, one of four on a small development, in early 2005 from their promoter, Francisco Pedrosa Moreno, only to discover in late 2006 that the property was in fact illegal and that the promoter had been END_OF_DOCUMENT_TOKEN_TO_BE_REPLACED 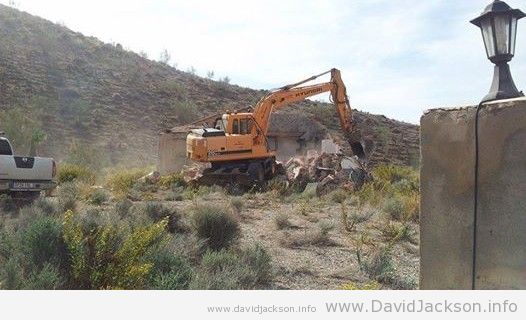 The Junta has confirmed it is to demolish two British owned homes in Las Terreras,  Cantoria this 18th of November. The demolitions are a continuation of two other demolitions carried out early last year, which were stopped by Cantoria townhall. The same sentence that ordered the demolitions fired the Mayor of the town, Pedro Llamas, for having lied to the court about allowing these homes to be connected to utilities. The original two demolitions were END_OF_DOCUMENT_TOKEN_TO_BE_REPLACED

An elderly Brit has been arrested after a police chase 23 km the wrong way up a motorway in Murcia. The 69 year old man, resident in Cantoria, had been visiting friends in Murcia and seems to have gotten confused, getting onto the motorway in the wrong direction. Pictured above being checked by the cops (thanks Ideal.es!) the chap caused the whole Cartagena bound motorway to be closed off whilst the Guardia tried to stop END_OF_DOCUMENT_TOKEN_TO_BE_REPLACED

A bus carrying home students from the IES ‘Valle del Almanzora’ secondary school crashed this evening as it took the children home. It seems the bus swerved into the path of an oncoming car on the AL-1100. Of the 16 kids on board, almost all of them were English (British?), according to the Guardia Civil, all aged between 14 and 16, and all children of local expat families. 8 children were rushed to hospital, although END_OF_DOCUMENT_TOKEN_TO_BE_REPLACED

dj: Press release follows: INDEPENDENT THEATRE PRESENTS: Independent Theatre are putting on a comedy production of ‘Nil by Mouth’ at Teatro Saavedra in Cantoria theatre this coming weekend. (Fri 1st and Sat 2nd July ) and also on the following weekend at Museo Pedro Gilabert in Arboleas (Fri 8th and Sat 9th July) . Tickets are 7.50 euros each and can be purchased from Bar Cantaria in Cantoria, Girosol health food shop and Almanzora’s Group END_OF_DOCUMENT_TOKEN_TO_BE_REPLACED

From MACS: Walk & Talk Fun Walk. This fun walk is taking place on Sunday 10th April 2011 at 10.30am and is organised by the Walker & Talkers Club. Tickets cost 2 Euros per person. Dogs welcome at1 Euro per dog and must be kept on a lead. This event was inspired by friends and members of the club who have been supported by MACS (Mojacar Area Cancer Support).Supporters unable to attend the event have END_OF_DOCUMENT_TOKEN_TO_BE_REPLACED

Having evaded the ever vigilant eyes of Hobday’s Cantoria Neighbourhood Watch Association, a group of local lads in Cantoria have been charged with adulterating diesel with corn oil before flogging it off to transport companies and local petrol stations. They made about six million euros, Hacienda reckons. See Petrol scam found in Cantoria Almeria “The operation, codenamed ‘Oil’,” – these coppers do think of some innovative codenames for their operations. Remember Operación “Costurero” (Operation Sewing), END_OF_DOCUMENT_TOKEN_TO_BE_REPLACED

A naughty person called in a hoax bomb threat to Cosentino’s Cantoria factory yesterday. Much excitement as sniffer dogs turned up. Teleprensa describes a “rural patrol” of the Guardia Civil taking control, no doubt bravely holding back the crowds as panicked employees scattered in front of lorry loads of soldiers. I’m imaging one of those war like scenes, here. Turned out to be a false alarm. Police are making threatening noises about “the maximum penalty END_OF_DOCUMENT_TOKEN_TO_BE_REPLACED