The Junta has approved the creation of a dry port in Níjar, which could create up to 3,400 jobs. We haven’t heard anything about this for ages and suddenly it pops up again. Question is: Where are the trains that will supply the port??? 174 hectares of land next to the motorway in Níjar has been set aside for this massive project. The idea is to create a logistical centre which will receive products from END_OF_DOCUMENT_TOKEN_TO_BE_REPLACED

The planned tortoise sanctuary in Cuevas del Alamanzora has again been put on hold. The national government had planned to expropriate 500 ha of land which would have closed farms, a campsite, two quarries and eleven homes. The plans were dropped earlier this year in favour of a new plan slightly off to the right. This plan has now been dropped after more complaints. A third plan is being mooted to put the sanctuary over END_OF_DOCUMENT_TOKEN_TO_BE_REPLACED

200 people in the Los Lobos area of Cuevas and Murcia stand to lose all they possess as a new natural park for tortoises is shifted to avoid expropriating farmland. The national government has been ordered by Brussels to declare a new National Park to allow the endangered local tortoise species to survive, after it ran the unnecessary and unbuilt AVE high speed trainline through the centre of their habitat. The AVE, along with the END_OF_DOCUMENT_TOKEN_TO_BE_REPLACED

The tribunal de cuentas, the people in charge of auditing government accounts (strikes me they could do more with a slide rule, but still) have said the AVE investment programme is unsustainable and recommended that all investment in the project be dropped. Spain has over 3.000 km of high speed railway but is insisting upon building more and more. The current track runs at a loss – the operating debt of the state company (ADIF) END_OF_DOCUMENT_TOKEN_TO_BE_REPLACED

A massive tortoise sanctuary project in Cuevas has been shelved after complaints by farmers. The central Ministry of the Environment wanted to create a new 500 ha natural park for the massively endangered local tortuga mora, but Cuevas townhall appealed and local farmers who looked set to lose land objected viciously to the plans. Some 130 landowners would have lost land under the plan, but the Ministry originally said that the land was unproductive and END_OF_DOCUMENT_TOKEN_TO_BE_REPLACED

The Council of Ministers have voted to free up 71 million euros to build the 12,2 km stretch of high speed railway between Pulpí and Cuevas del Almanzora. This bit of the AVE was supposed to be paid for last year, but the money comes four months after expected due to “technical problems” with the plans. It’s the extension of the abandoned AVE project that runs past Los Gallardos and Turre that cost upwards of END_OF_DOCUMENT_TOKEN_TO_BE_REPLACED

The Cuevas-Pulpí bit of the AVE was going to be contracted out in the last quarter of 2014, according to a promise made by the Minister for Development Ana Pastor during her visit to Almería last year. Well, it wasn’t. The final meeting of the Council of Ministers in 2014 came and went, and the 12.5km stretch of high speed railway wasn’t discussed. Excuses vary, but eventually an official Development statement said that the issue END_OF_DOCUMENT_TOKEN_TO_BE_REPLACED

Talk about gilding the lilly… The report from the Almería chamber of commerce into the provincial need for a high speed railway train has reported back, and a minimum of 3 return trips a day to Madrid are needed, for all the thousands of eager young businesspeople who need to flock to and fro the national capital for the business deals. (Haven’t these people heard of the internet?) José Cano from Asempel reminds us that END_OF_DOCUMENT_TOKEN_TO_BE_REPLACED

The government has confirmed that it has no plans any more to build a large AVE station at Vera, as was the original plan, and although the station is still “probably” going to be built, it will be a simple platform affair rather than a full blown train station as was originally planned. The announcement came during a series of meetings with industry leaders in the province held this week by Manuel Niño, Sec Gen of END_OF_DOCUMENT_TOKEN_TO_BE_REPLACED 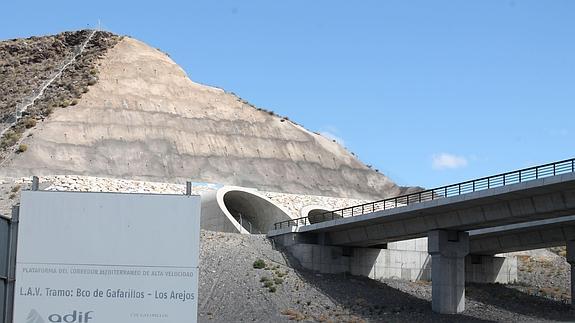 Some months after announcing that the AVE to Almería would be single line only, the government has made a sudden and unexplained U-Turn and promised that it will be double tracked after all. Nobody seems sure why the sudden turn around, unless it’s to allow the PP party in Almería to claim victory??? Or because since the government intends to privatise the Almería line, they’re afraid nobody will want a single line track. Anyway, the END_OF_DOCUMENT_TOKEN_TO_BE_REPLACED