Spain is rushing headlong into its worst constitutional crisis since the Civil War. And if Barcelona has its way, it will cause a crisis across the EU that makes Brexit look like an irrelevance.

Madrid has shown itself to be incompetent and opportunistic in refusing to listen to the nationalists demands. Although this has distracted attention away from allegations of corruption levied at the very heart of the ruling PP party, Mariano Rajoy has only poured petrol onto a rumbling fire.

Madrid has said that it will do everything possible to stop this “illegal referendum”. This means that on October 1, millions of Catalans will be denied their opportunity to vote, and will be told that it is due to “la casta” in Madrid.

The example of Scotland in the UK is being held up daily by the nationalist press – as an example of a free and fair society. By comparision, the refusal of Madrid to even allow a national debate on the question is firing the flames of nationalism.

Mariano is screwing down the bolts on the pressure cooker, and the inevitable result is an explosion.

And then the nationalists will call a snap election. On a single issue. And they will be hoping that the wave of resentment caused by Madrid’s actions will sweep them, again, to power.

And then they will announce independence, this time on the power of the legitimate vote. And Madrid’s only option will be to send in the military.

I was sent this photo today. It’s a photo taken by a friend in Barcelona. Military vehicles being escorted by national police on the Diagonal of Barcelona. Madrid is ready. 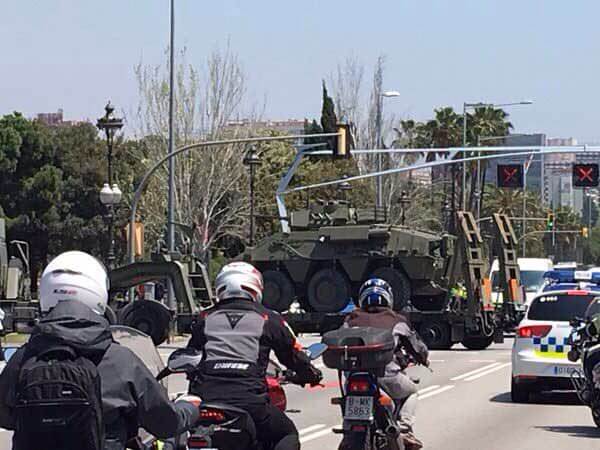 Realistically, what happens next will be down to international pressure. But many states of Europe have regions that want to break away. Allowing Europe’s fourth richest nation to be broken in half will be an example for them.

And the collapse of Spain will hit the EU hard. It has the potential to shock the federation to its core.

One thing is sure. The hard handedness of Rajoy seems to be going down well with the domestic voters. The press is united in backing him against Barcelona, and the opposition PSOE and Cuidadanos appears to be giving him their cautious support. Which means he is encouraged to continue down this dangerous path.

And once a Spaniard is headed down the path of legality and honour – paperwork and face, the two most important things to a Spaniard- one thing is sure. They will never, ever, back down.