Some would say that going 5 days without seeing rain in Scotland is good going. Frankly, coming from Almeria, it’s a bit disappointing.

I was going to the neighbouring island of Jura. It’s separated by a mile or so of water from Islay – a nasty bit of water which rushes past at high speed with the tide.

I’d originally planned to explore the paps of Jura. Martin Coventry stiffly notes that the name comes from “breasts, for their apparent resemblance to such things”. Couldn’t see it myself, especially as there are three of them. Some lonely Scotsmen around in past times, I reckon. 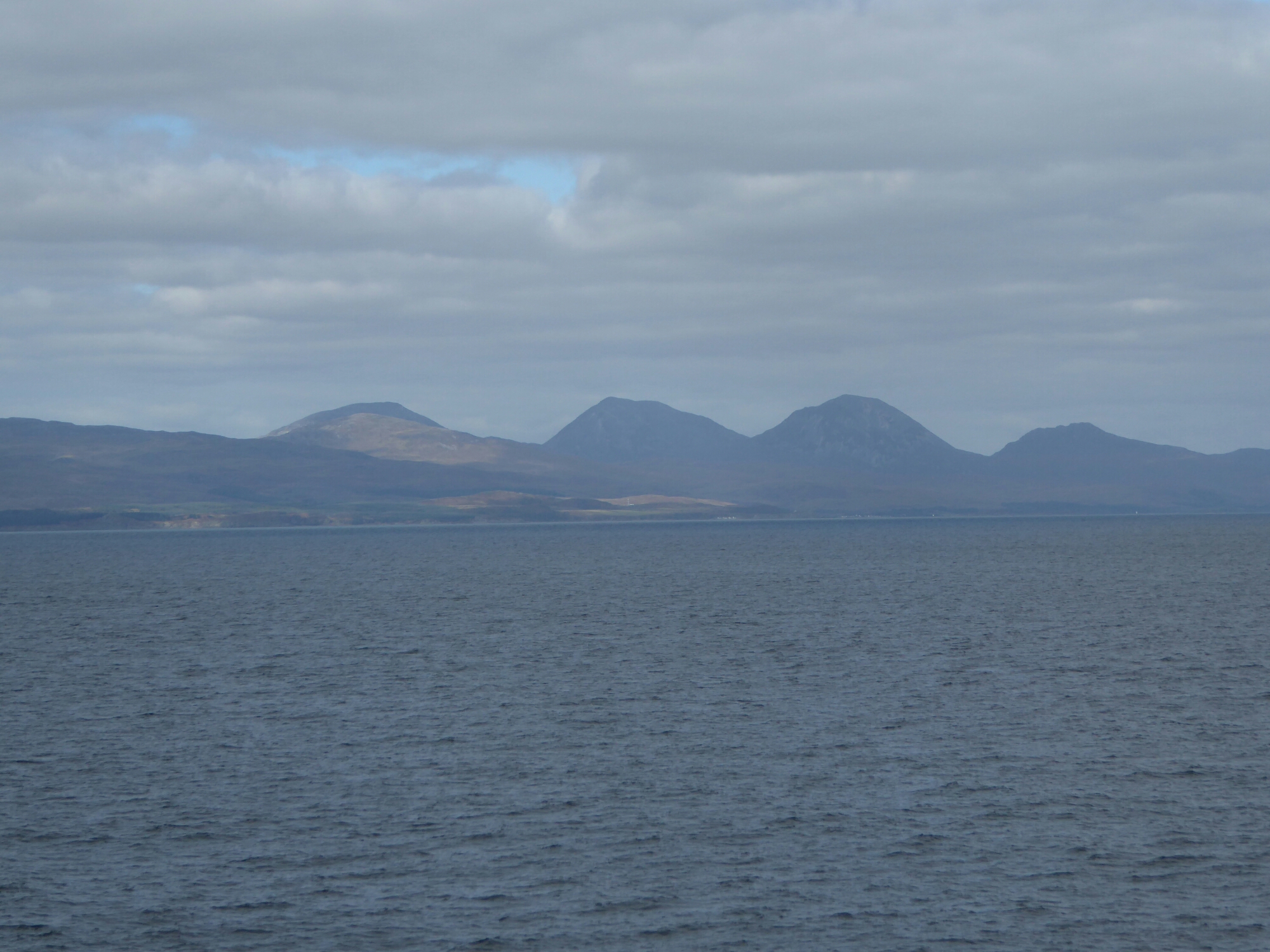 Trouble was, the weather forecast wasn’t good. Low level cloud and rain from midday. I didn’t much fancy clambering up mountains in that weather.

Plan B: I suddenly realised that I could see Corryvreckan.

Corryvreckan is the third largest whirlpool in the world, caused by immense tidal flow through a narrow strait. An immensely dangerous place for mariners, and considered to be unavoidable until the advent of engineers in ships.
Although the day was reckoned to be one of the best of the month for viewing it, I couldn’t get there much outside low tide. Still, it would be a nice trip.

I set off early on the 8am ferry. The sound of Islay was rough, and the little four car 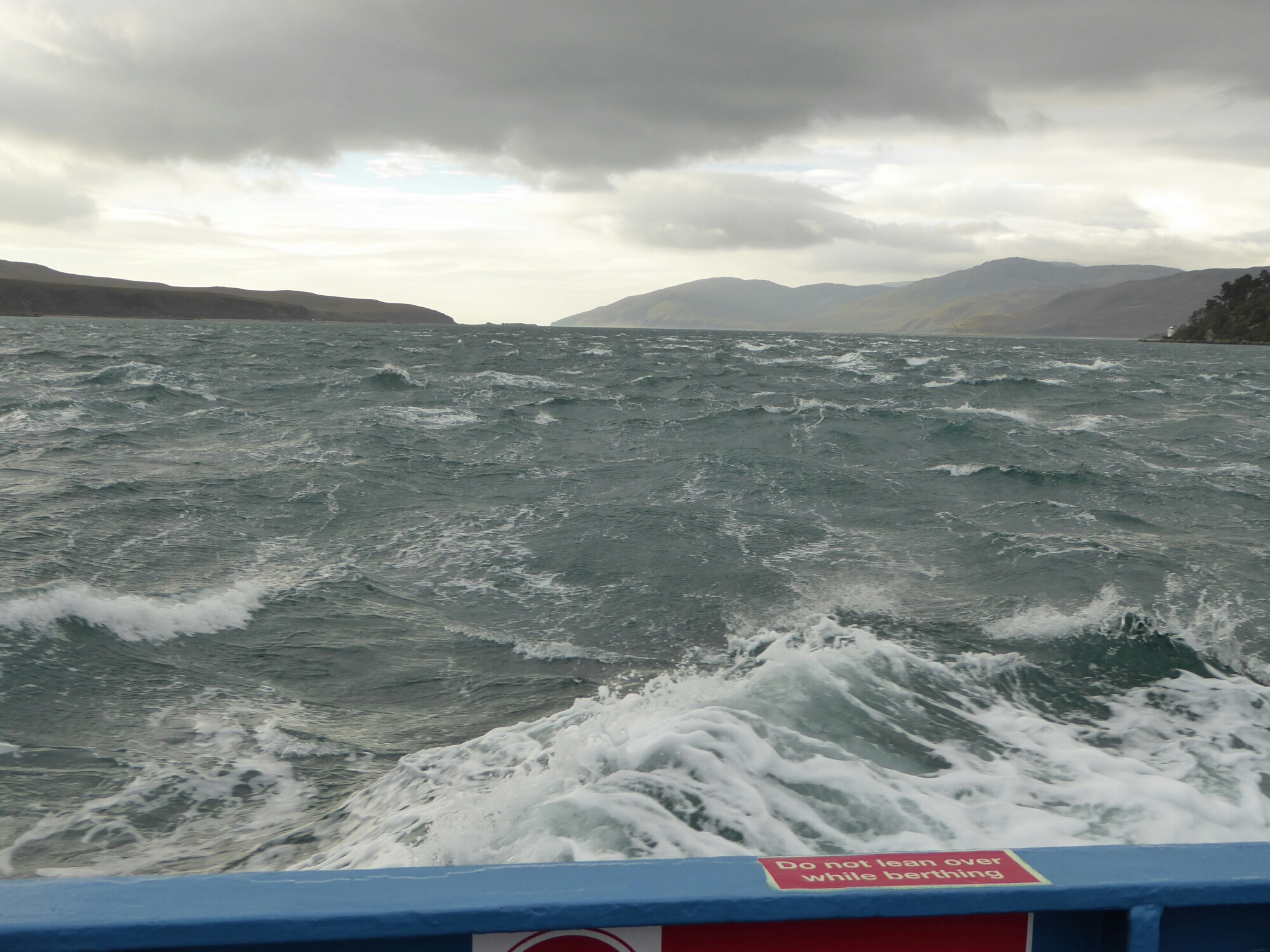 bobbedd around like a cork, water splashing over the edges. 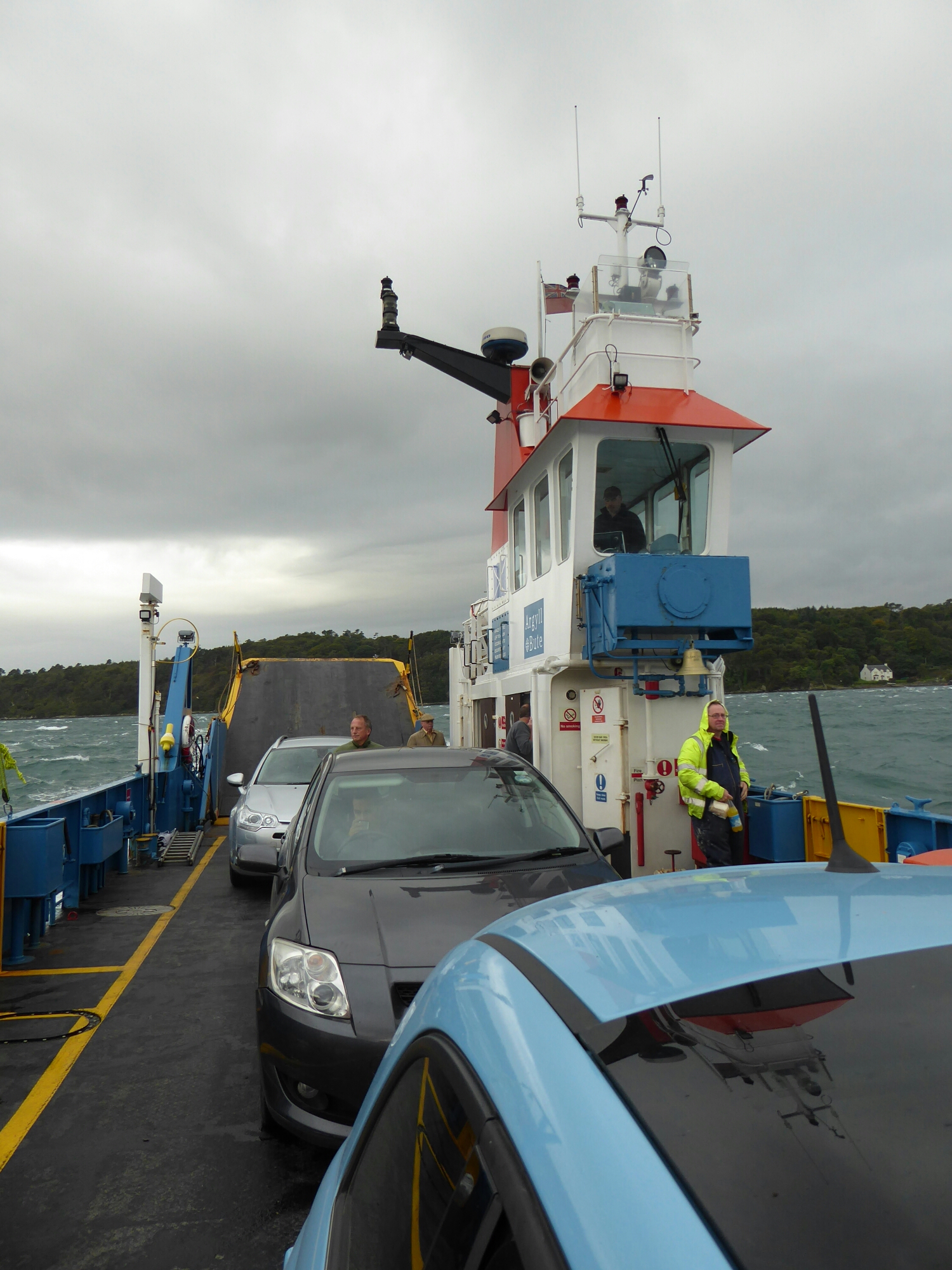 We got to Jura without incident. Ahead of me was a camper van with a young couple in. 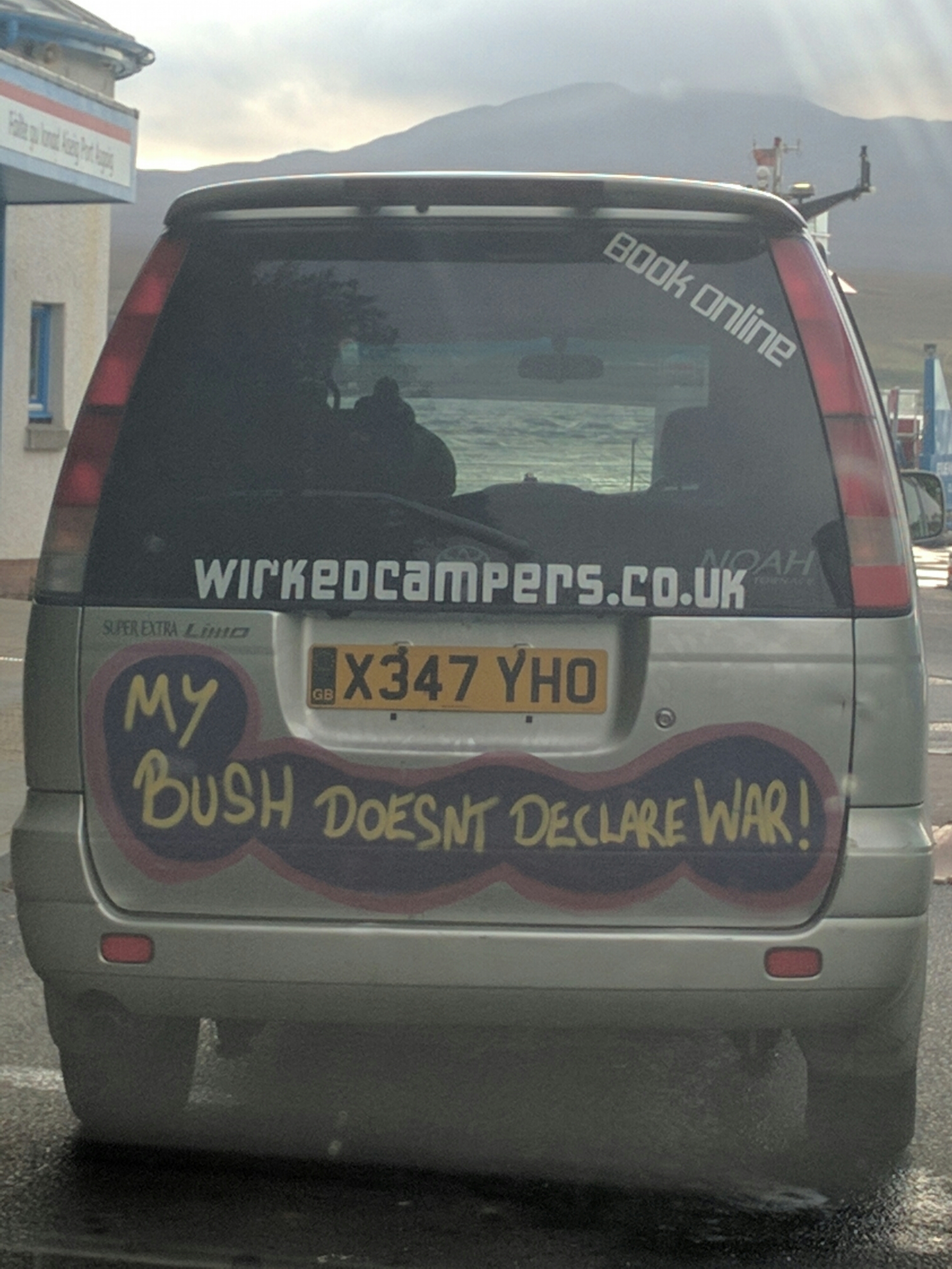 Islay is fertile, rich and prosperous. Jura? Am almost uninhabited wilderness, with a single track road leading to the main estates from which deer hunters set out. It was a countryside that, quite frankly, said that if you got lost out there, you could die.

To get to Corryvreckan, you get on the only road and drive over 30 miles. Up and down, round and about, it’s over an hour. Raw nature, red in tooth and claw.

Eventually you get to an estate you have to drive through, round the back of the barns, and then down to the end of the road. 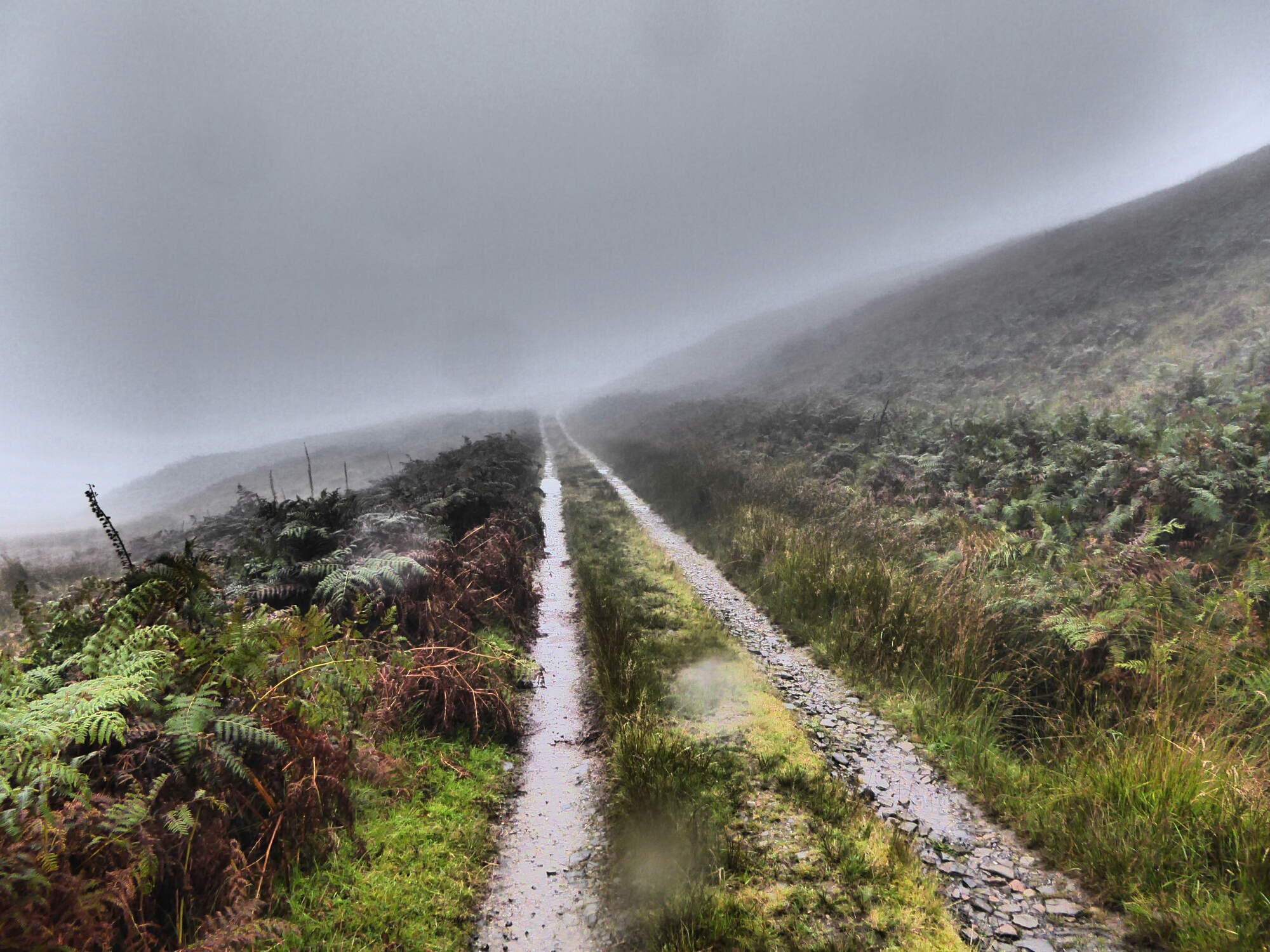 I left the car at the end of the road, shooing away a couple of cows who wanted to investigate the car. A large group of men with vast amounts of camera equipment were unloading a van, ready to set off.

Clouds were rather menacing, but I reckoned I could do it.

It’s a six mile walk to the end of Jura. A sign warned that hikers should set aside a minimum of six hours. Bugger that I thought as I set off.

After a few paces, I realised I’d forgotten to change out of my desert boots into my hiking boots, and had to slink back to the car to change.

Now, the route takes you past Barnhill, the house where George Orwell wrote 1984. Why he writes such a dystopian novel in the middle of such natural beauty, I have no idea. 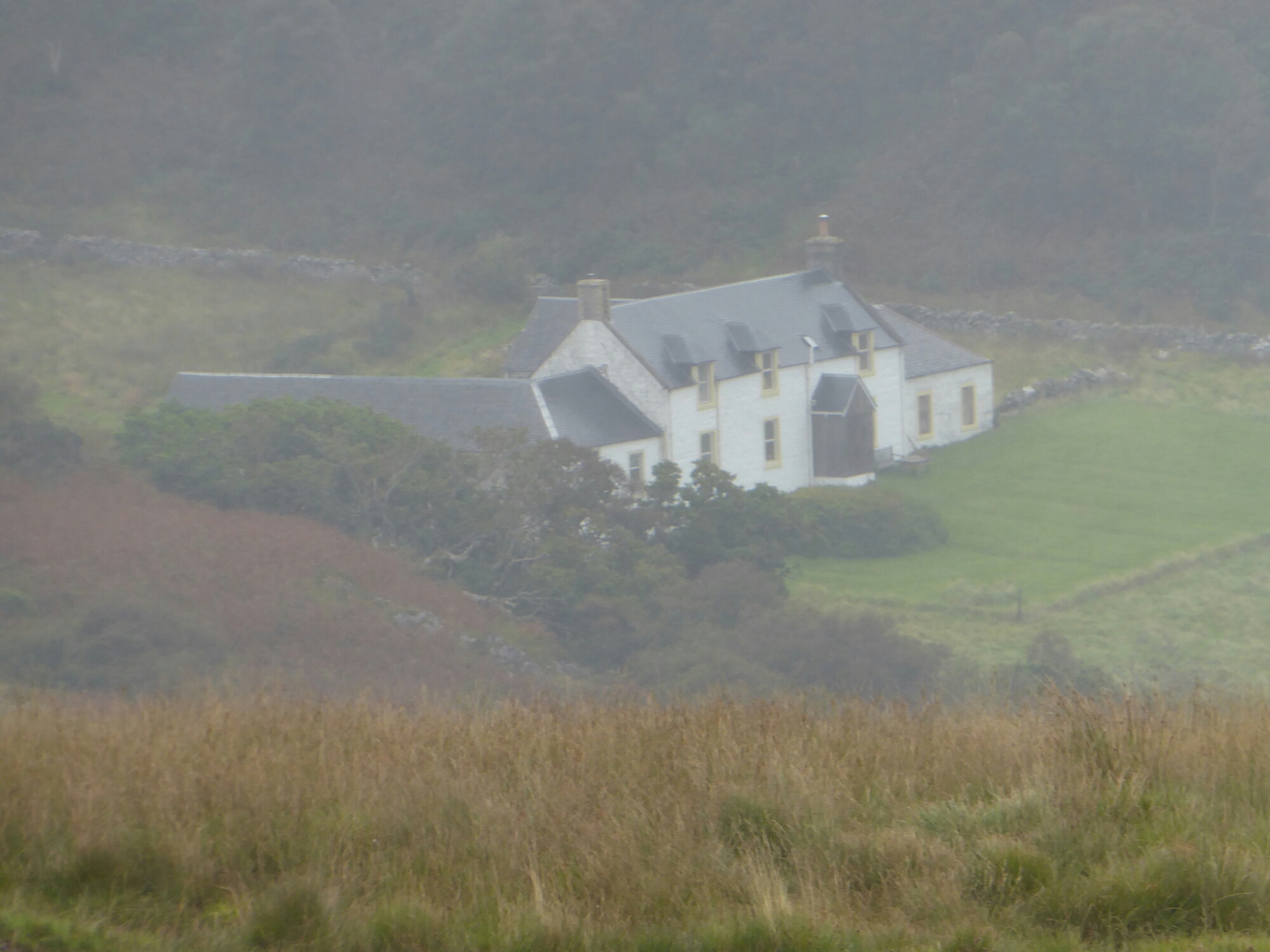 I traipsed on through the drizzle. Deer were everywhere, including some lovely stags. The path went past beaches and through ancient woodland. Eventually, it petered out and I was faced with gorse – and a sign. No doubt put up by some crofter, annoyed at hikers in his back garden. 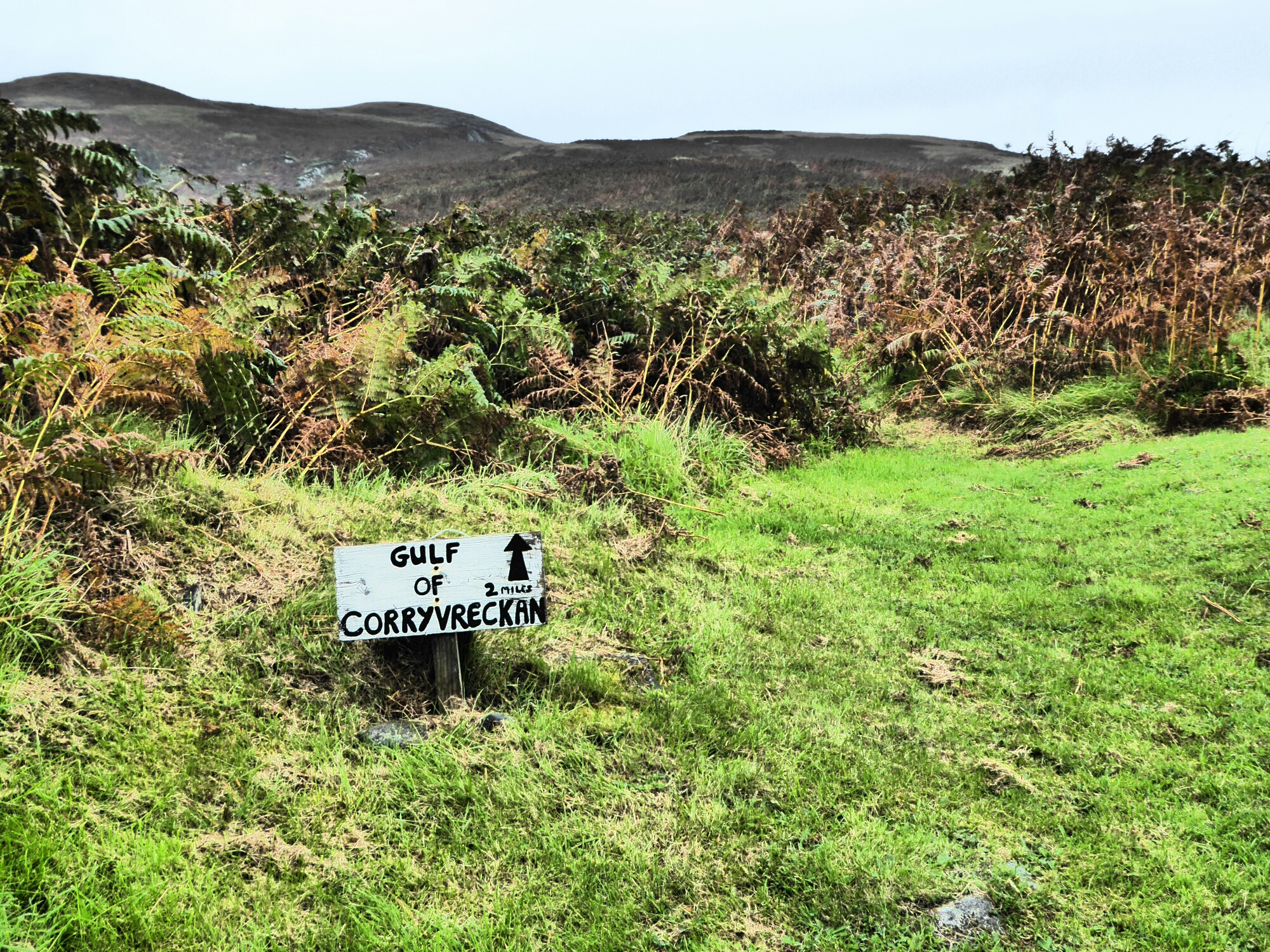 Another two miles through that?

The rain started to pour. Within minutes my trousers were soaked through. And as the going got boggier, my boots quickly became filled with water. It was glorious. 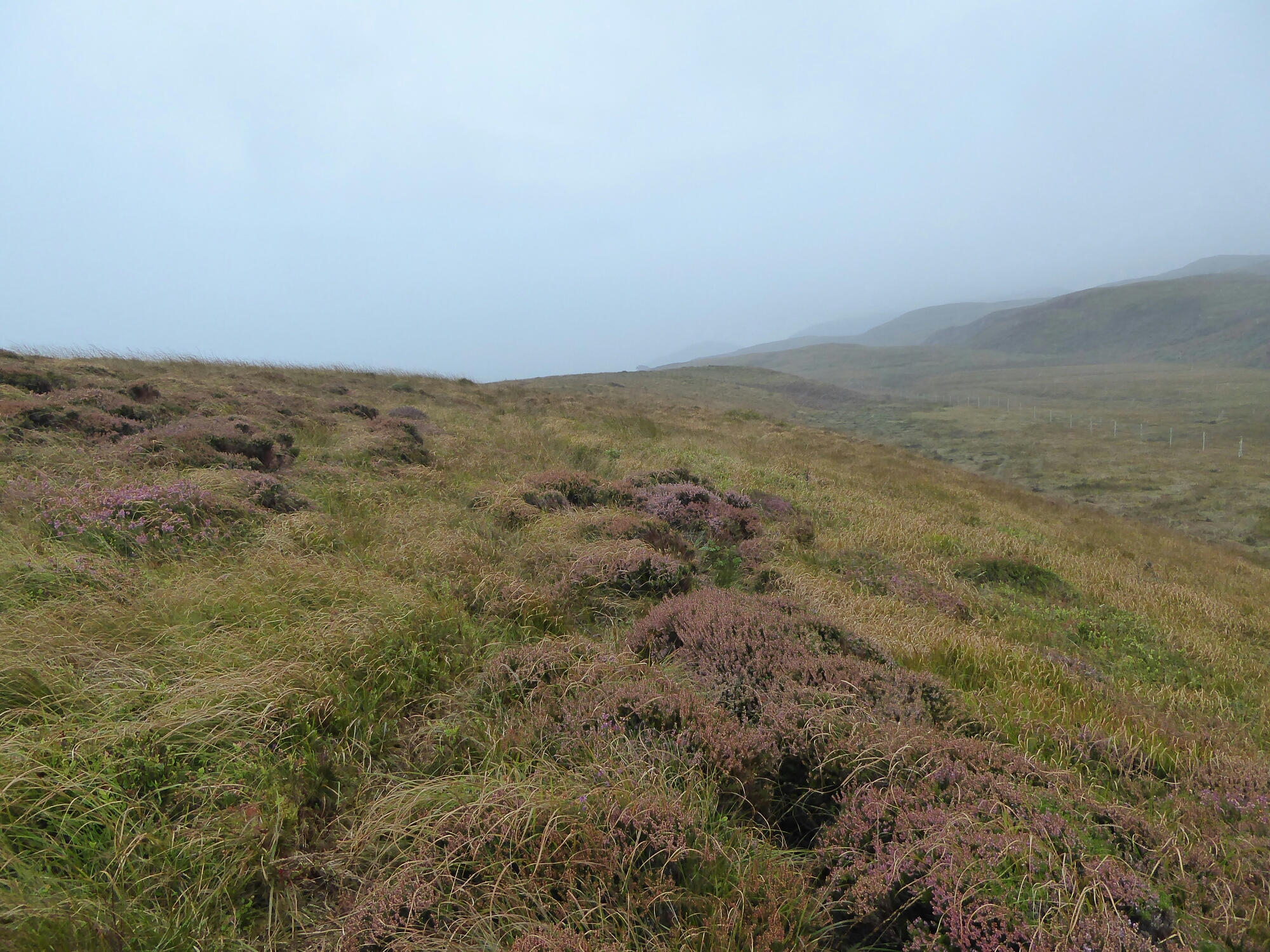 Eventually, in a moment of elation, I reached the strait. Want to see the whirlpool? It was too misty to see in the photos, although i could see the currents there as I sat in the rain, eating an apple. It’s there, behind my shoulder. 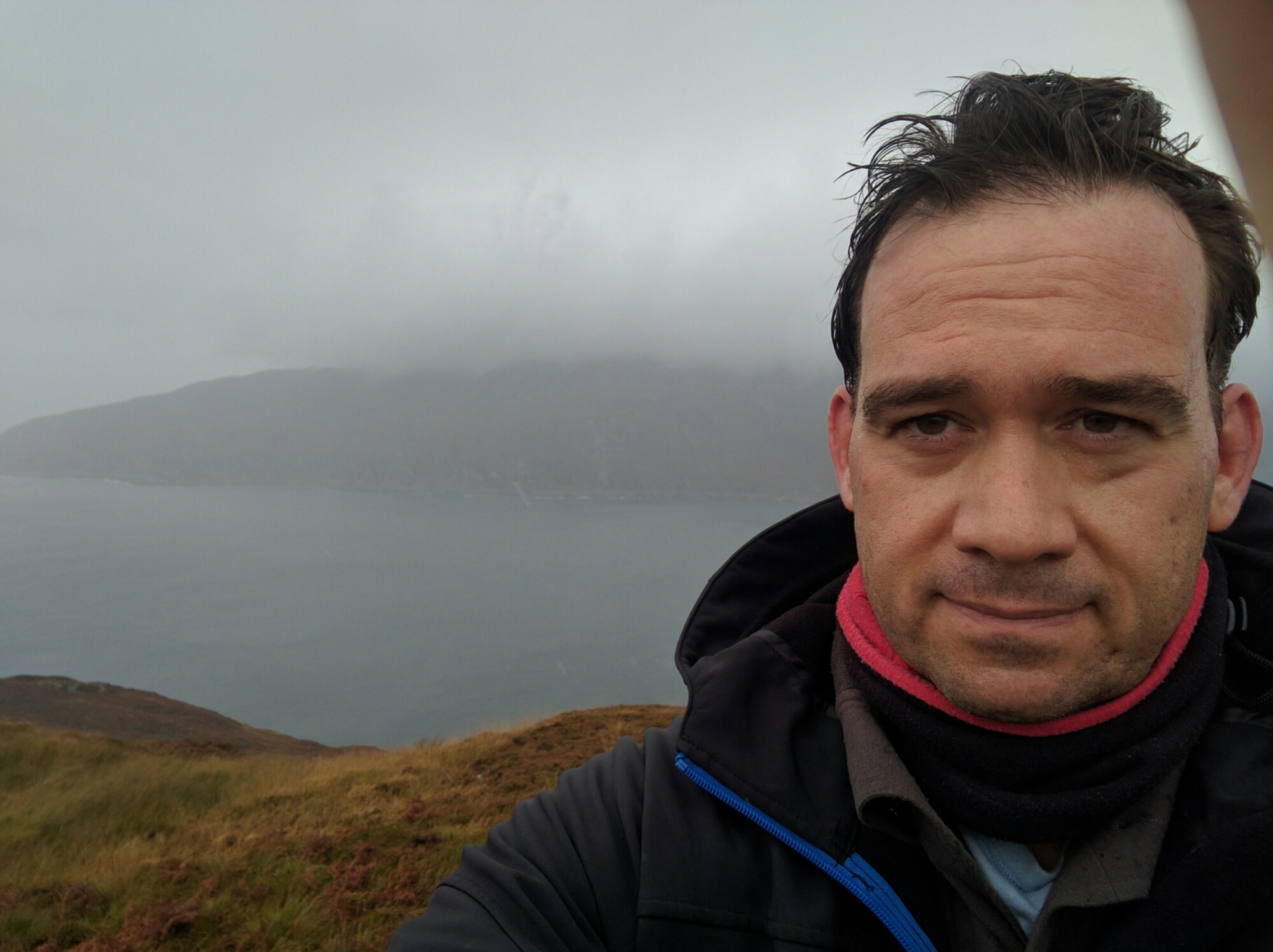 And so I traipsed back through the fog to the car.  I spotted this beauty amongst the trees 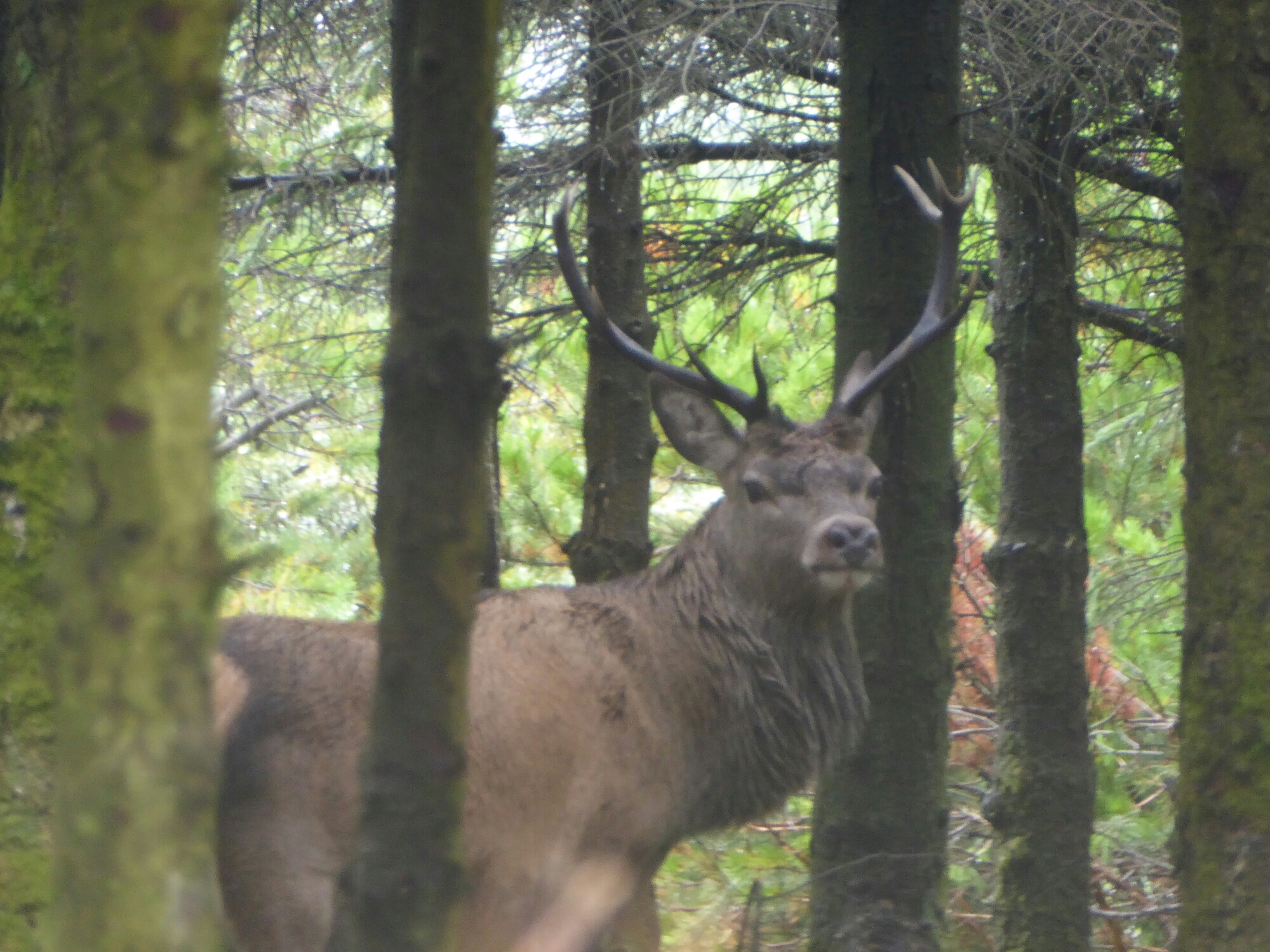 It took me exactly four hours and three minutes. Seeing as to how half that route was with boots full of water, I think that’s good going.

I stopped at the fuel station in Islay on the way back. The notes in my pocket had fused together in the rain, and I had to peel them apart.

The attended tuttutted. ‘last time i saw a man as wet as you’ he remarked, ‘the coastguard were hauling him out of the sea’.

A hot bath soon sorted me out, and that evening I went down to a Ceilidh, a music gathering. Good fun.

2 Replies to “Day 5: in which I do the Corryvreckan run in two under par”