The singing of seals is a magical and ethereal experience, haunting in its echoing call.

I sat enthralled in the early morning outside Portnahaven, feet dangling above a limpid sea, kicking against the old jetty as the seals sang, perched on rocks or gamboling in the waters edge.

It is no wonder that ancient mariners would whisper that there was a whiff of the mermaids lure in their song, for as I sat there with my eyes closed listening, the urge to jump in and swim out to join in became almost unbearable. 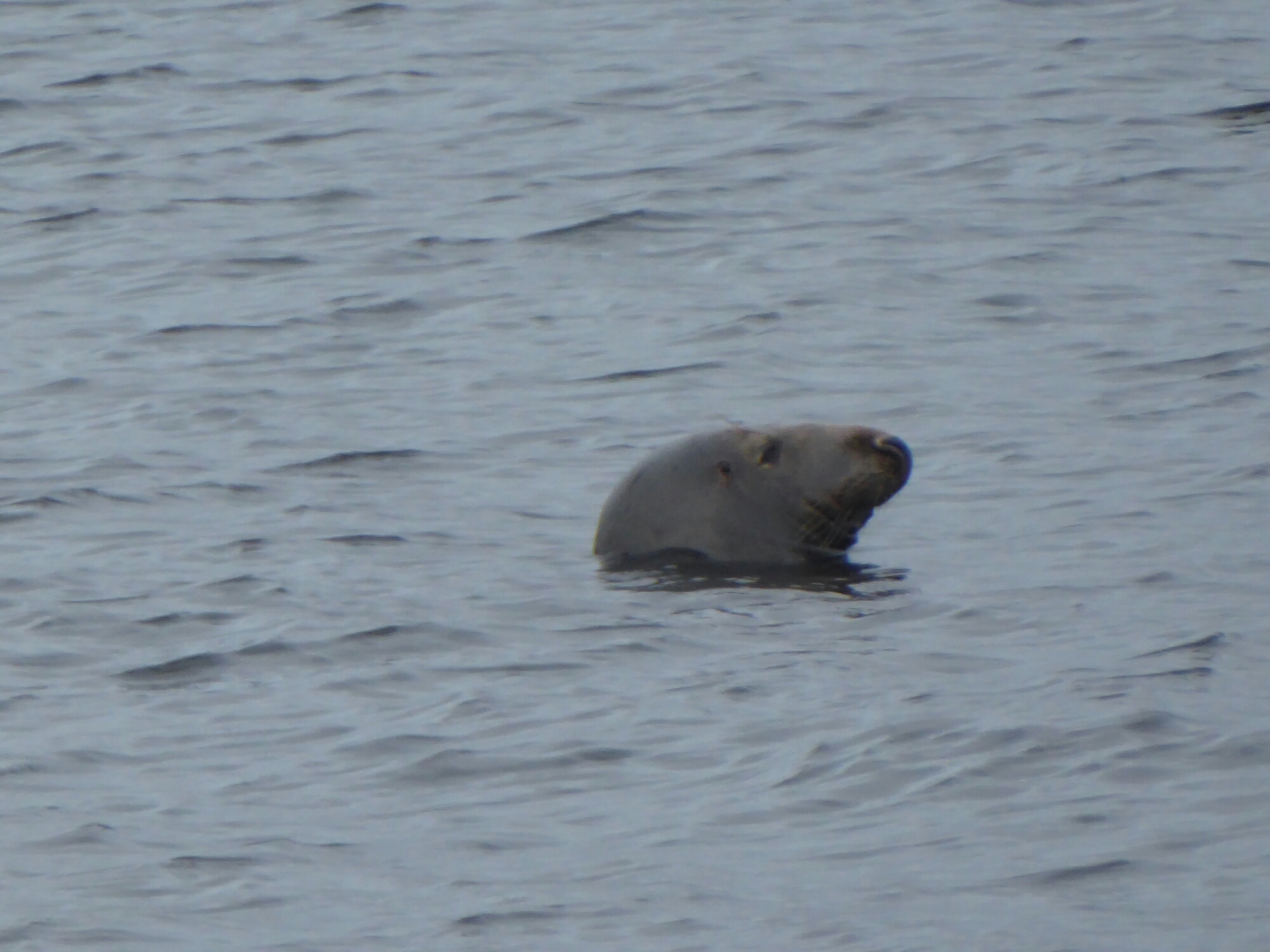 I didn’t, of course. Instead I went for breakfast.

Port Charlotte is a stunning little village in Islay, itself a stunning island. It seems rich and prosperous, with large farms providing the raw materials for the eight massive whisky distilleries here.

I was staying in the port Charlotte hotel, a great place with fantastic food. Large spacious rooms, friendly yet unobtrusive and efficient staff. The owner was telling me he used to be an amateur boxer. A small lighthouse protects the sheltered bay beyond the village.

There are a lot of Germans tourists around here. One lady was telling the landlord how this was her fourth visit to Islay, and that she came annually. In a corner table there was a group of who I suspect were Icelanders. And of course, the obligatory Americans. I even came across some south Americans lurking at the back of a pub in port Askaig.

I spent a busy day across Islay, visiting standing stones, bird havens, ancient monuments and other diverse places of interest.

The little museum of island life was fascinating, as such places always are. It was crammed to the rafters with memorabilia from the islands, from the stone age to the mid 20th century. I spent a happy hour in there, perusing the exhibits and occasionally ignoring the signs not to touch. Those cannon balls are heavy. But I barely fit inside the bed cabinet.

There are two interesting churches on the island. One of them is a roundhouse – so built so the devil couldn’t lurk in any corner. It was closed so I couldn’t get in. 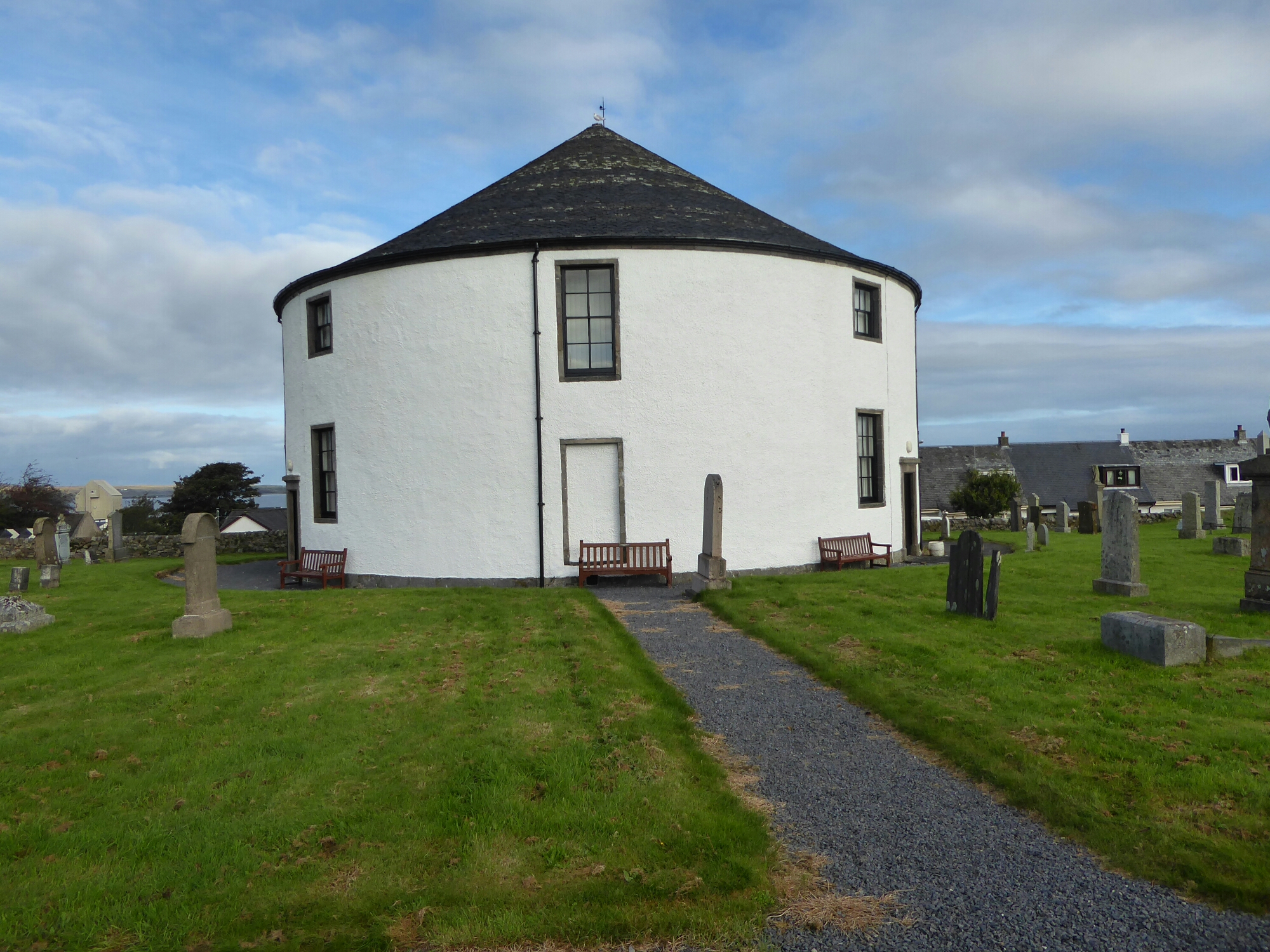 The other was built between two villages in a traditional shape. But the villagers fought over the orientation of the main door. To stop the squabbling, the priest ordered that two main doors be built, one pointing towards each village. A rare act of compromise from a church, but typical of level-headed Scottish pragmatism.
I have to say how lovely the islanders are. With their soft lilting accent and friendly nature, the craze for waving at every one you pass in the car has become a mania here. Every single driver gives you either a twitch of the hand, or if they think they recognise you, a full lift of the palm from the steering wheel. Either that, or someone popular drives a similar car to mine.

Talking of which, I was perplexed to find the blue bomber covered in grass when I left the hotel. Seems a passing tractor dragging a trailer full of hay had sprinkled it as it trundled past. The farmers were busy getting in their hay, with bundles and combines harvesters everywhere. Very rural. Could have been back in Gloucestershire.

The island is a mixture of farmland, peat and nature reserves. There are two huge RSPB reserves on Islay, and the island hosts tens of thousands of Atlantic geese in the winter. The first flocks were already honking their way through the skies. Along with harriers, buzzards, croughs and hundreds more.

And deer. Lots of deer. I went deer stalking through the woods, with some success. 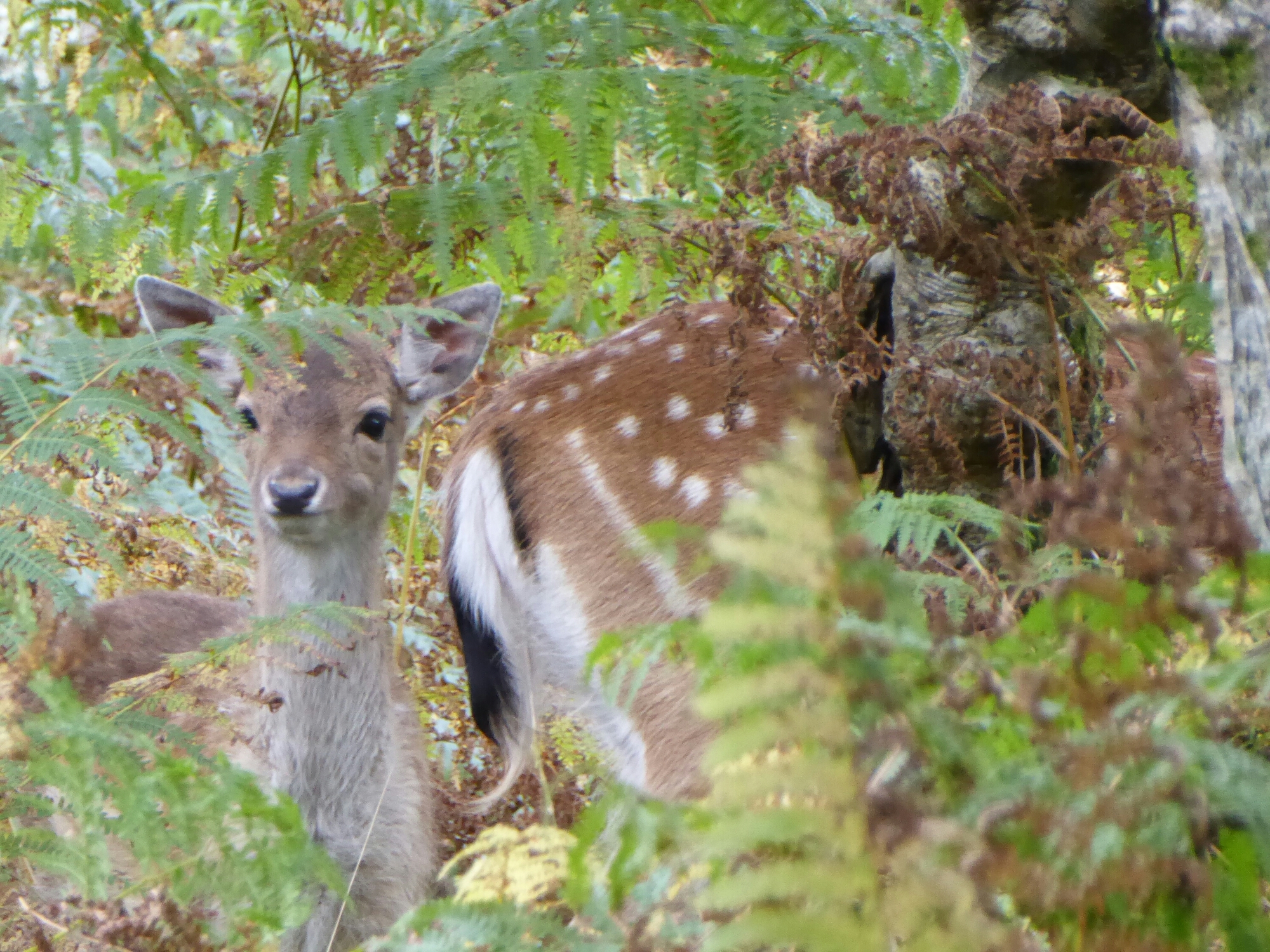 Cows, of course, have to shooed off the road at every turn in the remoter parts. More than once I had to get out of the car to slap them off. They tended to wander over to the car, possibly looking for a place to scratch themselves, thus causing me nerves over my insurance excess.

I went hiking over to the stupendous and remote Saligo bay. Full of fat Americans of course, who all looked bored. I think they’re here because of a USA cemetery for the bodies of shipwrecked sailors. They were staring at the bones of an old shipwreck with no great enthusiasm. Eventually they waddled off back to their tour coach. One of them fell into the small brook that bubbled its way along the path to the car park, to my secret delight. 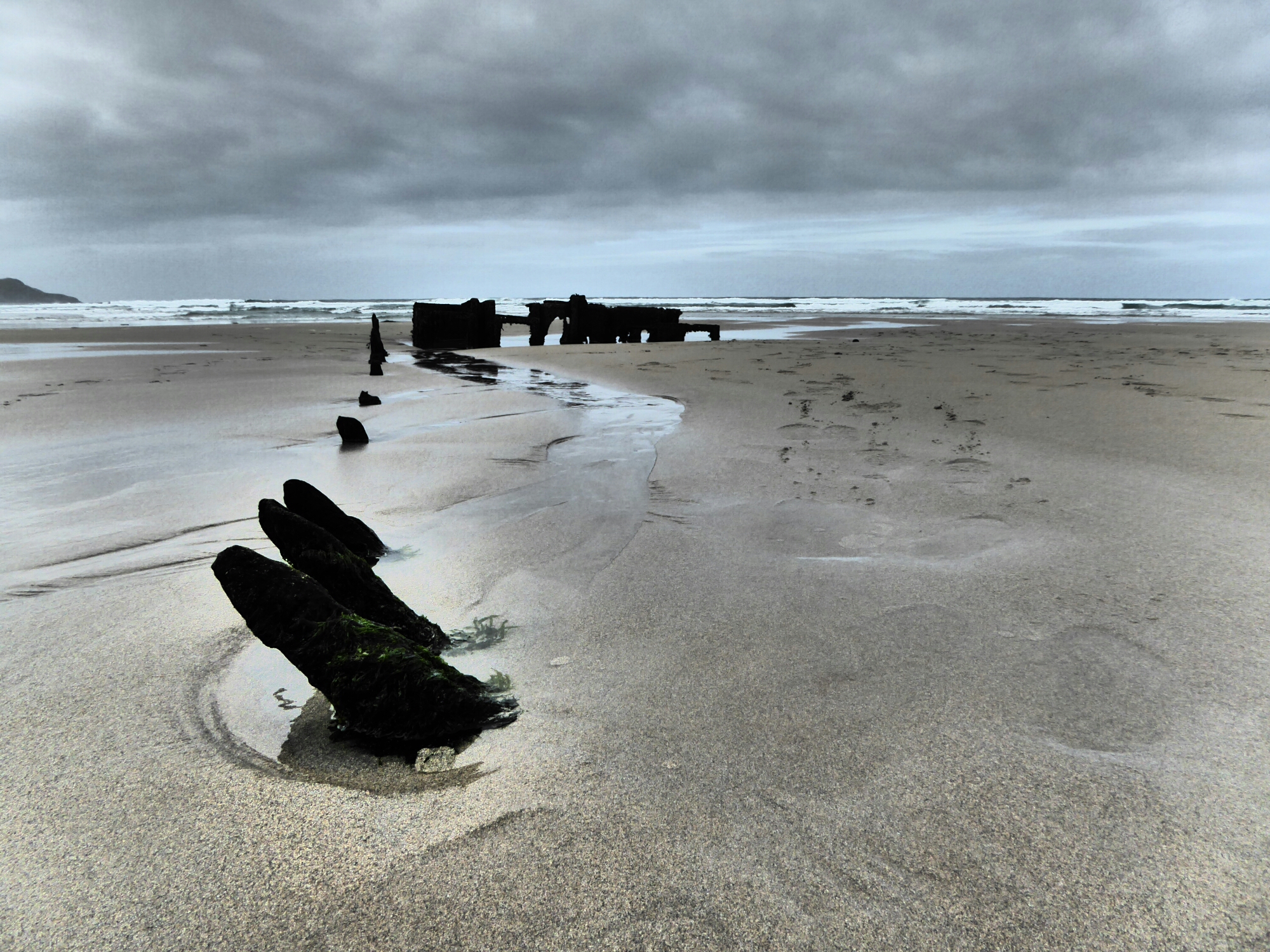 Later, clambering over rocks and bays around the headland, miles from anywhere, I made a friend in a horse who came over to say hello and see if I had a sugar lump. I didn’t, but he still trotted along with me for a few miles.
Feeling the pressing need to allow that mornings coffee to reemerge, and aware that nobody was around for miles, I cautiously found a cutting on the beach between two large rocks and unzipped the flies. In mid flow, a family of four wandered by.

‘Nice day for it’ the father greeted me as the mother shepherded her daughters past. In desperation, I put on an exaggerated German accent and wished them a ‘guten morgan’. They carried on their way, whispering about continentals and their ways. Never saw them again, they could have been fairies from the grassland in the way the appeared and vanished once again.

I went via the ruined church, which sits in the middle of an untended cemetery. Next to it is a well tended cemetery for 400 sailors who drowned off the beach when their troop carrier sank off shore in the war. 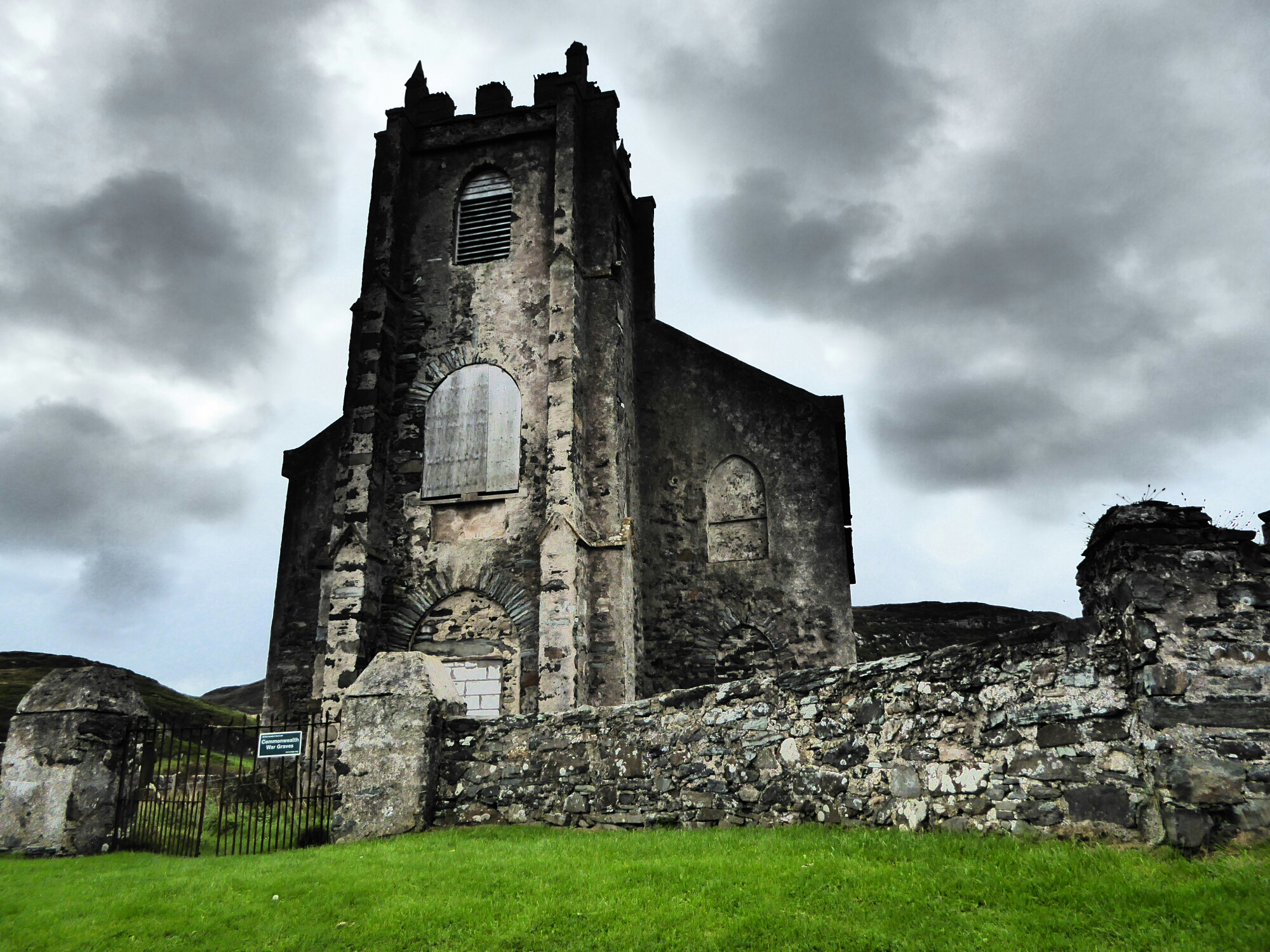 A while later, as I perched on a rock out in the sea, I started to contemplate tidal motion. This sudden interest in natural philosophy was caused by my noticing that the bit of dry beach I’d just walked over to get to these rock pools was suddenly being washed over by waves. I beat a hasty retreat, with no greater loss than a damp boot. You don’t get tides in the Mediterranean.Instead I headed off to RSPB guiten, where I was able to wander through ancient Atlantic woodland and use a real hide. I didn’t see anything apart from a duck from the hide, so emerged blinking into the sunlight. Above me, in the opposite direction, two hen harriers fought a busy noisy battle over a female. Thus proving that organised bird watching is a waste of time.

The toilets were clean at the visitors centre, which was unattended. A small kettle and selection of teas and coffees were on self service, with an honesty box next to them. Another honesty box was on the wall of the toilets. Feeling generous I dropped a -small- coin into it. It instantly dropped out a hole in the bottom again. Fair enough, I’d done my best and so put my coin back in my pocket with a feeling having done my duty.

From there I headed to Finlaggen, which bills itself as the ancient home of the lord of the isles. It’s a historic place, an island in the middle of a lake where the lord lived with his village until James V took the islands over in the mid 1490’s. A small visitors centre was plonked in the middle of the car park.

Now, I instantly took against that visitors centre. No idea why, I didn’t even go inside. I think it was all the adverts for services posted over all the windows – cold drinks, Ice creams, snacks, etc. That, along with a demand for a donation to visit.

So I skipped around the centre and found the entrance, which was unguarded. No mention of a ticket being needed, just another plea for donations. Confident of my legal standing, i slipped through and headed on down to the lake. 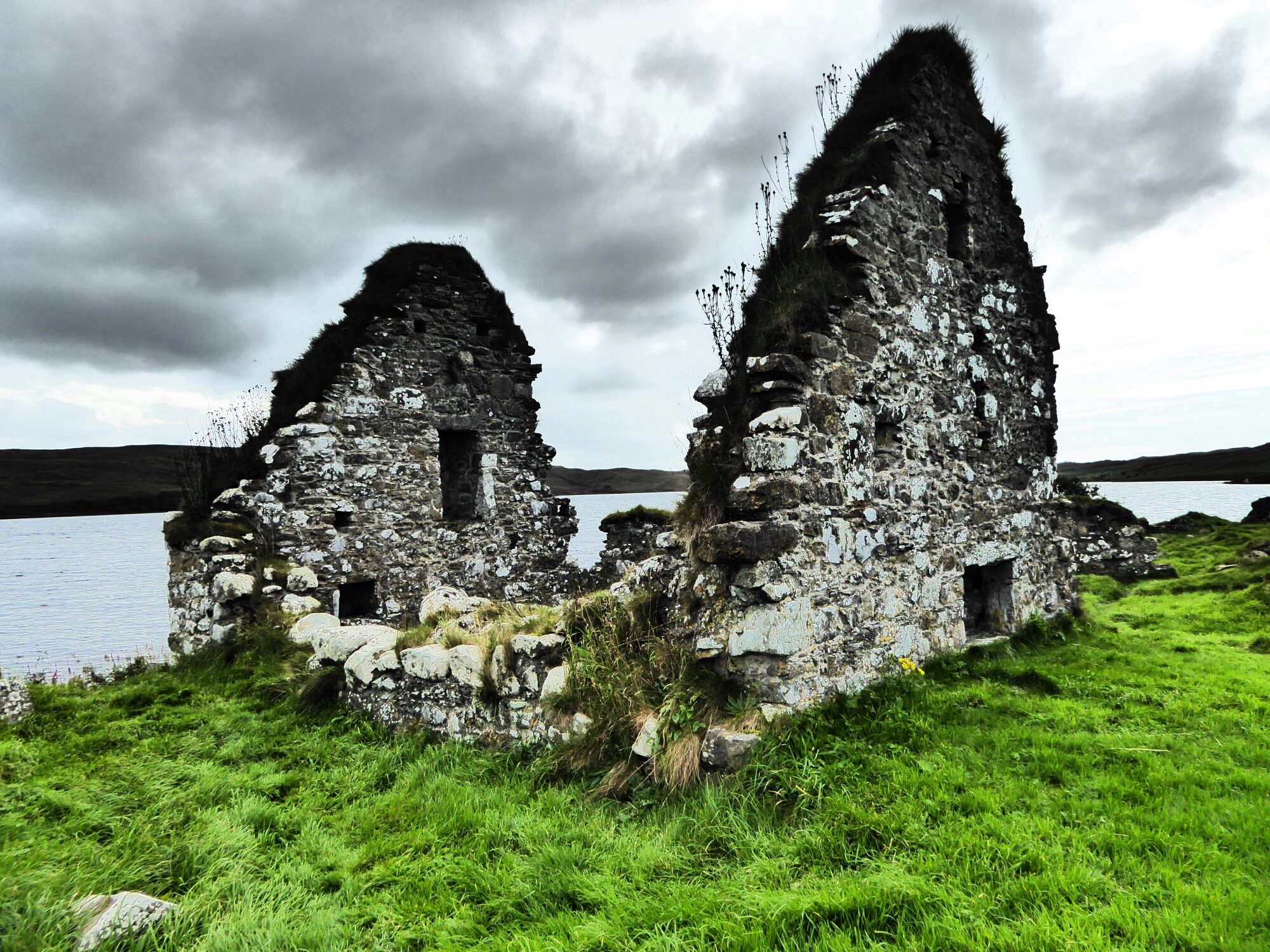 You reach Finlaggen -incidentally, the name of a very good local ale- via a raised bridge. Nothing to do with the visitors centre, it was built by the royal engineers during exercises here in 1997. The place mainly consists of six information panels explaining how life was here six hundred years ago, and a few half ruined houses. It was interesting, but not enough to make me feel guilty for not donating.
But it’s a famous place and worth a trip. The ferry that took me back carries that name. Later, reading the lonely guide entry, I noticed it said much the same about the visitors centre and avoiding the entry toll.