Garrucha council claims the previous administration “squandered” resources of the town’s civil protection units by allowed equipment to be “abandoned and ransacked”. An internal audit has laid bare the true cost of not properly maintaining emergency equipment.

The council says the worst example is that of two zodiac boats used by lifeguards. The sea patrols have not been in use since 2011 due to budget cutbacks, and the boats have been found in a terrible condition. 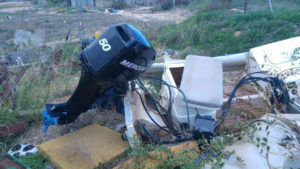 One of them was found in an outside storage facility, and the other in private property of a resident from Turre. It is not known how the boat got to Turre.

The council says it would cost over 15,000 euros to repair both boats, which should be an essential part of lifeguard services in the summer months.

Other equipment is also in a “lamentable” state according to the internal audit. Amongst other deficiencies, it notes that the town defibrillator has not been maintained for several years and is not in an operative condition.

Emergency generators have seized up and temporary bunk beds purchased in the case of a general emergency have vanished, although half of them have been located in Los Gallardos. The neighbouring town was storing them after use as Garrucha never arranged to pick them up.

The municipal archives have also neglected. The council says it has found ancient records “abandoned in boxes” with no protection or organisation. “This is our history, and it has been left to rot” said the councillor for culture of the town.

A similar incident occurred this week in Roquetas, where the opposition IU party denounced the “lamentable state” of civil protection vehicles which it claims the ruling council has left to rot in poor storage conditions.

A spokesperson from the association of civil protection volunteers told this paper that it was common for councils to “over reach themselves”. He said “it is sadly not unusual for councils to start new services, usually with a grant, without planning how they will maintain the service in future years”.

Civil protection associations are groups of trained volunteers who assist councils with public order or provide backup to emergency services. The volunteers are trained and equipped by local councils, who also exchange cover with neighbouring towns when needed.