A group of builders staged a demonstration in Turre’s townhall building today. They were protesting against a council order to stop work on a new building in Cabrera.

The workers of Jose Gerez and their families congregated at the council offices to protest against the paralyzing of works. Snr Gerez said that his workers wanted to know “from the Mayor himself why they were not allowed to work and feed their families”. 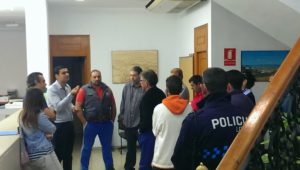 Mayor Morales made a speech explaining the situation. He later told me: “The permit for the works was issued many years ago and is now expired. When Jose restarted works we warned him that he would have to apply for a new permit but permitted work to start whilst he filed the paperwork. But we now realise the project has changed completely and so the work cannot continue until he is granted a new permit. The law is the law”.

Snr Gerez accused the council of “arbitrary management in bad faith” and claimed to have complied with all council requests which he said “were unending and constantly changing”.