Correos had a presentation yesterday of a commemorative stamp illustrating the thousand year anniversary of the Kingdom of Almería – 1014 – 2014.

This seems to have come two years late, so I may be missing something in this story. 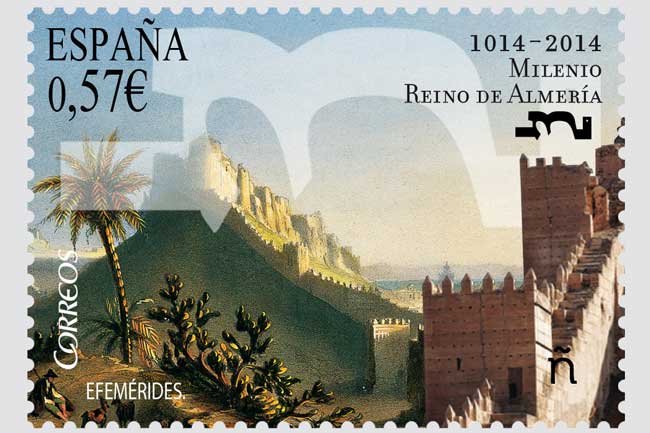 The backdrop is from an early 19th century lithograph taken by Nicolás Mª Chapuy, whereas the forefront is a modern photo by Pako Manzano. The big “m” is the official logo of the “Milenio Reino de Almería” association. Efemérides means “today in history”, not sure why it’s on the stamp but there must be an official meaning. I don’t know much about stamps. I know a 57 stamp doesn’t get a postcard out of the country…

There’s also an official matasello, a word which is much better than its English translation postmark. (Matasello literally translates as stamp killer, which is basically what a postmark is. Spanish can be a poetic yet functional language). Here are some local worthies trying it out:

The Kingdom of Almería was born out of the Muslim civil war that erupted amongst the kingdoms of the Caliphate of Córdoba after the Muslims were defeated by the French and prevented from pushing forwards into Europe. Overstretched and harassed by the northern Catholic kingdoms of the north and far east Peninsula the Moors fell back to the south and started to squabble.

A chap called Jairan Al-Amiri slunk back to the city of Almería, gathered the locals and announced he would be the new local King, although the kingdom was called Taifa. It was one of 39 kingdoms that formed the Caliphate of Cordoba.

Almería blossomed over the next century – it had a massive urban population of around 30,000 –  until those blood thirsty Catholics descended upon the city in the mid 12th century and sacked the place as part of the second Crusade.

The city never recovered and was taken over by the neighbouring Moorish kingdom, losing its self identity. It would later fall into Spanish hands when the Catholic Kings came a-nkocking in 1489.

Ideal newspaper notes that this stamp is the 24th stamp featuring Almería to have been issued by Correos since 1931.