Emergency repairs being carried out on the ‘Puente Vaquero’ bridge in Turre to reinforce washed out foundations have been finished.

Extensive work has been underway for the last three weeks and last Thursday senior politicians came to Turre to oversee the end of the repairs. 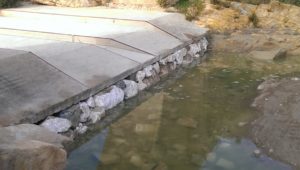 The bridge’s foundations have been reinforced with one ton boulders and rubble.

Turre’s famous bridge was in “severe danger” of collapse after its foundations were undermined.

Water gushing over the dam beneath the Puente Vaquero had excavated so much soil that a senior road engineer had informally warned Turre council that the ninety year old bridge could collapse without warning.

The provincial minister for the environment has admitted that Turre could have been “cut off at any moment” such was the damage to the foundations, but that the bridge “was now safe”.

He added: “we cannot control natural phenomena such as flooding but must remember that climate change and human activities all contribute to the frequency with which they happen, and the negative impact they can cause on our environment”.