There are suggestions that local councils should consider regulating the use of mobility scooters after an apparent increase of the number of people using them on the public road. Benidorm council recently had to regulate their use and other tourism centres are studying their example.

Such vehicles are not regulated under Spanish traffic law. Insurance is not required for mobility scooters, and no vehicle tax is applied.

Local police across the Levante have been surprised by an increase in the number of such vehicles being used on the main road. 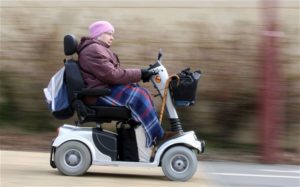 Juan Fernandez from Turre said that “I recently came close to having an accident with such a scooter on the Mojacar road”. He added: “it was late afternoon and as I went round one of the sharp corners I found him driving slowly along the road. I had to pull out sharply and very nearly hit an oncoming car. It was very dangerous for all involved”.

And a Mojacar bar owner who asked to be anonymous complained to us about mobility scooters taking up valuable public parking spaces on the playa. “They should park on the pavement” he said.

The traffic law in Spain considers such electric vehicles to be subject to the same regulations as pedestrians, along with electric and manual wheelchairs. Mobility scooters importer E-Scooters explains that the law states their vehicles should use pedestrian routes except when when not available, and should not use any road when they cannot reach half the posted speed limit.

However, handicapped people have an exception to drive them on urban and secondary roads as long as they have sufficient reason, do not block traffic or endanger themselves or other users. A non-handicapped person may not do so under any circumstances.

It is up to councils to regulate the use and parking of such vehicles, and locally there are no such regulations.

Councillor Maria Luisa Cervantes of Turre council said that there were no plans to regulate. “It would be up to the local police to identify the problem and request a political solution from the council” she explained.