Skip to content
Some 100 people came from Cantabria, Almería, Málaga and Valencia to the Senate on June 24th to call for justice, as a compromise text presented by the Partido Popular to an amendment proposed by the Socialist Group was agreed.
When this initiative becomes law, the houses of innocent families cannot be demolished without prior compensation when planning permission is revoked, as happened to the Priors for whom this change, sadly, comes too late.
Representatives of the groups composed of  Maura Hillen and Gerardo Vazquez from AUAN , Phil Smalley, Kath Williams and Fernando Montero from SOHA and Ciriaco García, José Manuel Olaiz, y Antonio Vilela from AMA,  met with the parliamentary groups accompanied by  Helen and Len Prior, the British couple, whose house in Vera, Andalusia was demolished in 2008 without prior compensation.
This change is a very important step to bring justice to thousands of families and the associations express their grateful thanks to the Senate for this great expression of democracy in action.
This new amendment is in addition to the one that took place in March of this year when ,via the same procedure, the Senate approved another initiative of the associations to modify the Criminal Code to ensure prior compensation to purchasers in good faith whose properties were at risk via the criminal courts. 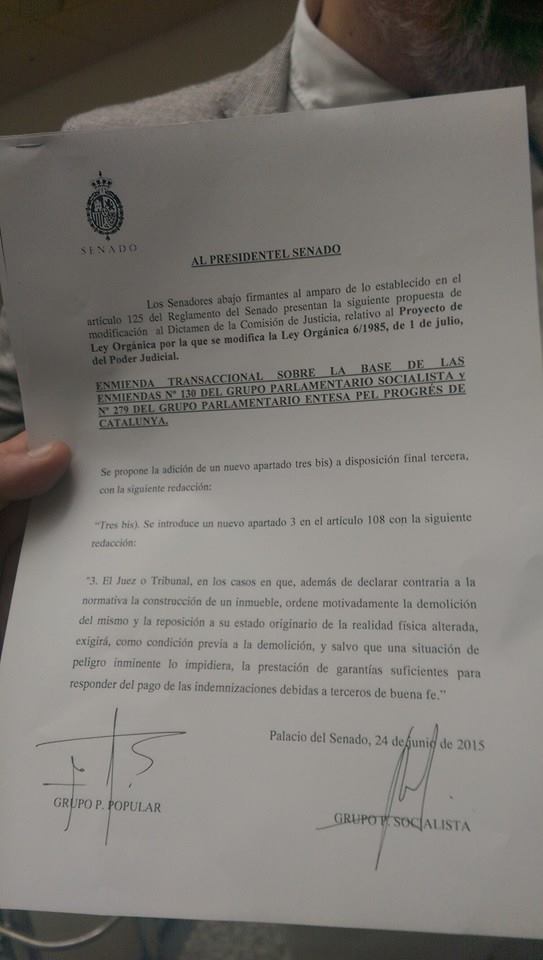 COMPROMISE TEXT APPROVED TO ARTICLE 108.3 OF THE LRJCA ( CONTENTIOUS ADMINISTRATIVE LAW)
‘Compensation prior to demolition’.