Garrucha townhall has announced that it intends to repave and update the paseo marítimo after it presented a budget for 2015.

The seafront promenade will have over €200,000 spent on it, mainly tarmac and repainting all the parking bays. The money is coming from the Diputación, county council.

Officially known as the Paseo del Malecón, most of the work will be concentrated at the port end where recent works have left the area in a lamentable state of patchwork. The intention is to tidy it all up and seamlessly integrate the new bits into the old.

As usual, the townhall plenary session was another farce with the leader of the opposition being thrown out over a question about the “missing millions” the Mayor is alleged to have lost, misappropriated or kept (a Judge is looking into the affair) and the rest of his party stiffly marching out in protest of their leaders fate.

Here’s the paseo marítimo in the late 30’s. Some of those old buildings are still there! 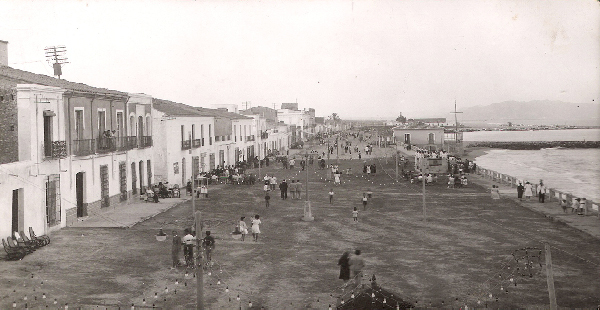