The government has announced that Almería will be the only AVE line in Spain that is single line only, in a shock announcement that seems to confirm that the expect traffic will be light, and that Almería won’t be connected to the rest of Andalucia by train.

There are other bits of single line AVEs in Spain, but no other line will have single line platforms. The government has confirmed that all stations on the line will be single platform only.

The bits of the AVE line already built on double track will be modified into “overtaking lines” to allow slower trains to get out of the way of faster ones.

There are accusations that this is the beginning of the downgrading of the line from AVE to a simple merchant track.

So the question is – since merchant trains usually run on Spanish width, will the government decide to forget the passenger only AVE line and just push the Talgo track to Almería?

Anyway, 104 million euros has been put aside in the national 2015 budget to build 12 km of line between Cuevas and Pulpi next year. The line won’t connect to anything, but it will be an eyesore. Meanwhile, our local hospital has closed a couple of wards and stopped all inpatient surgeries due to lack of cash… 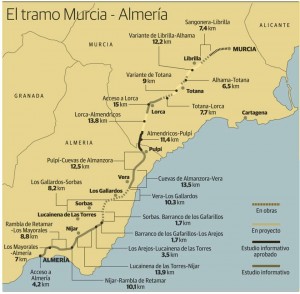 2 Replies to “It’s official: the AVE will be single line only in Almeria”