I’ve been looking at the population of the province, for no particular reason, other than a scary headline in the La Voz screaming population plummets as Almerienses go abroad for work.

How true is this? Well, first off, let’s remember that the official data is screwed by the fact that many guiris don’t bother registering on the townhall, and so don’t get counted.

And a big push last year to update the census caused populations in some areas to plummet – Los Gallardos, for example, wiped almost 30% of its population off its books just by deleting everyone who no longer lived there.

Anyway. Here’s a somewhat rambling collection of official data which I gathered this afternoon, and I haven’t really put it all together properly yet. I’m just throwing it up here and talking to myself.

The original La Voz article reckons the population has dropped by some 5,000 people in 2013 for the first time in half a century.

Let’s break down these figures. All data from INE the stats office except where otherwise stated.

Here’s the number of births for the last 37 years

And here are the deaths for the same time scale: 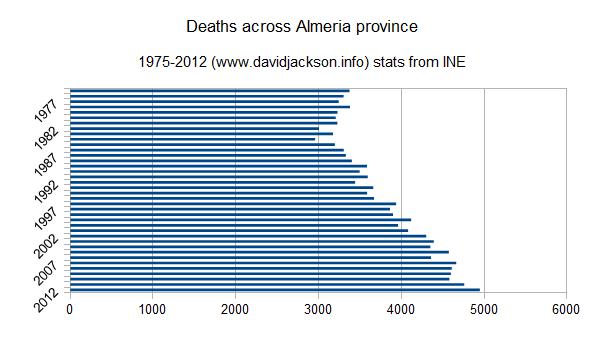 What we see here is a simple demographic trend – the population is getting old, the birthrate is dropping and the death rate is rising. Let’s have a look at the % of the over-64 population who live in dependency on someone else (ie, is registered as needing care). OK, so this varies a lot depending on which law is in force at the time, but overall they will be a sociodemographic tendency as the population grows ever older:

Let’s look at migration, for which I could only find data from 2008-2012. Eh, it’ll do. Immigration from Spain is, I understand, people born in Spain who have emigrated and then returned.

Here’s the net migration , that is, the result after emigrants are deducted from migrants (from the INE office, not my calculations).

Now hello, what do we see here?

2008, there was a net migration of 12,000 people into the region, most of them African, Rest of EU and South American (ie, the cheap labour).

2012, we see a net addition of fewer than a 1000 people join the province, and the people who joined before 2010 leaving in droves.

The conclusion is simple.

The Spanish population of Almeria province is rapidly ageing, due to a combination of net emigration by Spanish youths (backed up by a graph which I just lost), a low birth rate and immigration by EU residents who I suspect are of the older generation.

At the same time, the contraction in the local economy has forced many migrant workers to move on, causing the population to drop.

Well, there are fewer migrant workers around; you’re more likely to find an old boy in the local bar than a group of youths; the local population that remains is ever more dependent on care and health service; and actually, the foreign population of retired and semi-retired northern Europeans appears to be staying fairly static.

So probably not a good idea to open an all year round disco for local Spanish youths, then.

Anyway, fascinating stuff which I intend to delve deeper into when I get some more time.