The land the ill fated Algarrobico hotel in Carboneras has now been declared BUILDABLE (urbanizable) in a shock Supreme Court decision.

This ruling contradicts a 2012 ruling by the same Supreme Court, which mentioned in passing that the land wasn’t buildable. The promoter of the hotel asked for clarification of this point, which came back yesterday.

The same ruling states that:

This sentence does not directly affect the legal situation of the revision ex oficio of the building permits of Hotel Azata del Sol (the Algarrobico), as although it rules on the classification of the land use, this only rules on a modification of the protection level which was issued after the concession of the disputed license, and the proceedings surrounding issuing of said license

Which in theory means the court says yes it’s buildable now, but not necessarily when the permits were issued.

Ecology groups at the time accused the Junta de Andalucia of pretending to protect the park with one hand and allowing illegal building with the other, which was the fashion at the time.

As part of all this, bits surrounding the park were supposed to be made urbanisable to allow Carboneras and Mojacar to develop.

The Court ruled that although there appears to be no bad faith by the Junta de Andalucia, it has been unable to explain why it issued to many contradictory orders at the same time. 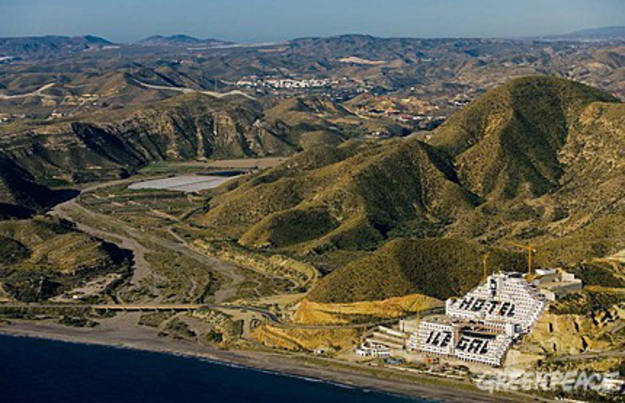 The ecologist groups (Greenpeace and Ecologistas en Accion) have already announced that they will appeal to the National Supreme Court. Although this ruling is supposed to be “firm”, and cannot be appealed against, Greenpeace says since this contradicts a previous ruling without overturning it, there is a legal reason for considering this decision in a higher court. The ecologists are also appealing on the basis that the judicial ruling is unsound in law.

This ruling doesn’t, in theory, affect the upcoming Supreme Court decision on whether or not the hotel is illegal and must be demolished. But the ecologists fear the ruling will give the hotel owners a legal basis on which to appeal the case if it is lost, causing yet further delays.

My personal opinion is that this is the court “cleaning up” after the politicians and rubbing away any accusations of impropriety – the ruling blocks any comeback on the Junta if the license for the hotel is found to be illegal.