Remember last years “Ecce homo” fun? When an old dear decided the mural of her church needed restoring, did it herself, it looked like a muppet and the original mural turned out to be a priceless work of art? And then loads and loads of tourists started turning up to gawk at it? 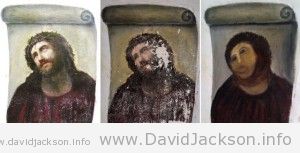 Anyway, in a further blow to whatever belief we had left in Humanity, the Catholic priest at that Church has just been nicked by the Guardia for running off with all the cash.

Oh, and the obligatory “couple of sexual offenses” of course.

70 year old catholic priest Father Florencio Garcés was lead away by the Coppers yesterday evening after a review of the accounts spotted a missing €210,000. The money isn’t the cash that was paid by pilgrims wanting access to the Church (the canny priest had put a tollbooth in the entrance when he saw the crowds) but rather from the daily collection plate. The entrance money went weekly to the Fundación Sancti Spiritus which had an OAP residency nearby. The Fundación SS has also announced it will be trawling the blogosphere and suing anyone who claims the Fundación was involved, so I’ll repeat the official line that they weren’t involved.

He’s also accused of money laundering, blackmail and two counts of false reporting of a crime, as well as two counts of sexual offenses (no news on who or where).

Police say they have been tapping the priests phone since last May, when the economics crime department became suspicious of him. When they searched his home yesterday they found 3,200€ in cash, laptops, mobile phones and other such things:

The old dear who did the mural in the first place stood up for him. “He’s a lovely man” she said stoutly. “And they dragged him away like a criminal”.