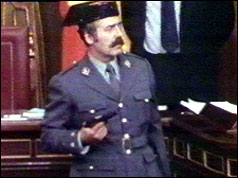 Ex-copper Lieutenant-Colonel Tejero (ex L-C, he was fired from the Guardia Civil for leading an attempt to overthrow the Spanish parliament on the 23rd of Feb, 1981 – his coup détât was eventually defused by King Juan Carlos, who refused to back them) is back in the limelight for denouncing the President of Catalonia on sedition and treason charges.

Tejero was the leader of the coup attempt, and his face became famous as the whiskery fellow brandishing a pistol. He served just 12 years of a 30 year jail sentence, before being pardoned and sent into retirement, although stripped of his rank.

Not one to mince his words, Mr Tejero (as he’s now known) has presented a personal complaint to the Attorney General indicting Artur Más on charges of sedition, consipiracy and treason against the Spanish State.

The complaint relates to President Más’s promise to offer Catalonians a referendum on independence from Spain if he wins next weeks regional election, which he is generally expected to.

According to a letter published in “Melilla Hoy” by the ex-cop, Más is attempting to subvert the course of natural justice and Spanish democracy by breaking Catalonia away from Spain. Tejero, “whose smiling face is the main photo of the cover of the newspaper” also takes aim at the Spanish authorities for keeping silent on the matter. “Neither the King, nor the Parliament, nor the Prime Minister… [..] are doing anything to prevent the breakup of our nation” he laments.

And if anyone should know, it’s him.