The Minister of Justice has personally ordered an investigation into whether or not the mayor of Marinaleda, who looted a bunch of supermarkets in his town and ordered neighbours to riot against the Police, has broken any laws.

Eh? He ordered his local police away, got 400 odd rioters to fight off the National Police patrols that turned up and ransacked two Mercadonas and a Carrefour, causing at least two cashiers to need medical aid for stress.He claims to have given all the loot to a local NGO for distribution to the poor of the village, adding “death to capitalism” and leading his followers through his town in a protest march. Here he is: 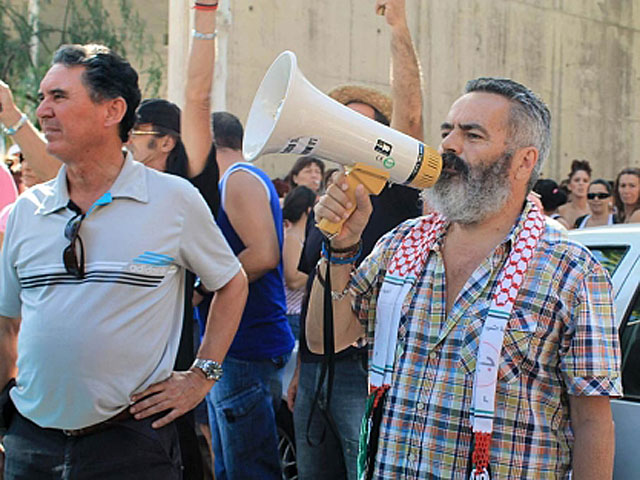 And we need the Minister of Justice to personally order an investigation?

The food appears to have been distributed amongst 118 squatters in an abandoned block of flats in the town, who occupied the block with the tacit encouragement of the mayor several months ago. One weeping woman told the press that “today I made meatballs thanks to our mayor”. El País reckons that he couldn’t find an NGO that would touch the looted goods, and that the local foodbank closed the door on him.

Mind you, when confronted by a unit of the Guardia Civil in front of the camaras earlier today, he quickly told them that he had done nothing wrong, and claims not to have entered any supermarket. Seems a bit cowardly to me. Did he slip the cops a list of names?

Anyway, the IU, who seem to have completely lost their grip on reality, have accused the PP of running a witchhunt, and attempted to subvert the natural course of justice, adding that they support this nutter (who belongs to the IU) and that he has done nothing wrong, legally or ethically.

Maria Moretó, leader of the progressive syndicate of public prosecutors, said that her organisation deplored the looting, adding that it was the first step on the slippery slope towards the rule of the jungle. This appears to have annoyed the loony left, who accused her of betraying their “progressive and unionist” tendencies. Etc etc etc. The attitude was summed up by one of the leaders of the IU, Gaspar Llamazares, who claims that the Spanish Civil Code “clearly permits such actions in times of need” and again said that the PP was taking Spain back to the Franco days, adding that they were a bunch of “overreacting hysterical hypocrites”.

He also asked Rajoy to “reign in” his Minister of the Interior, who he claims is acting “like a local sheriff out of the Wild West” by ordering an investigation into the acts.

The Guardia Civil and National Police have been ordered to identify and detain the authors of the attacks and riots, although apparently not the mayor himself, who is of course as mayor the local Mr Untouchable (look at Enciso from El Ejido – 250 million euros pinched and he’s free to enjoy the profits). The supermarkets involved have also filed criminal complaints at the courts. A national debate, stoked by the right wing press, has been ignited over the rights and wrongs of looting to feed your family. According to El Mundo, 58% of respondents to their online poll reckon the acts were justified.

Anyway: feel free to rob Mercadona. Just do it in the most press worthy way possible. It appears that our political leaders are allowing us.