The Mayor of Marinaleda (Seville) broke into two Mercadona supermarkets in his town today and looted a load of goods which he says are “for the poor of the village”. José Manuel Sánchez Gordillo (IU) together with dozens of people, mainly from the left wing union SAT – some reports say up to 500 looters were seen.

The so-far-left-wing-its-lost-over-California union Sindicato Andaluz de Trabajadores (SAT), under the leadership of this prat Sánchez, said that they were “occupying the powers that rob the poor of their land, the banks, and the supermarkets”. 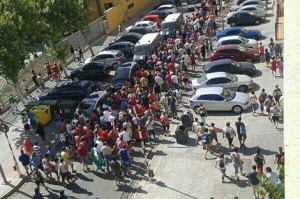 The Mayor appears to have ordered the Local Police not to intervene in during the robberies. Instead, he and about thirty others went inside to fill as many supermarket trollies as they could, whilst the rest of the unionists rioted outside, keeping the National Police at bay. Supermarket workers attempted to stop the looters but were told to back down by their managers after the SAT lot “turned violent”. At least one young girl who worked on the till had a breakdown and had to be attended to by a doctor, according to eyewitnesses on twitter, and she might have been pushed over when trying to stop the looters.

All the trollies will be handed over to an NGO for distribution to the poor, according to Sánzchez, although he refused to say which NGO would get the loot. I assume that any flat screen TV’s that accidentally fell into the basket will be kept by the proliteriat heroes for their own usage, monitoring the capitalist bastard society.

Sánchez is a bearded left wing anarchist mayor who has appeared before in the New York Times. Disgraceful.

Marinaleda became a center of leftist activism after Mr. Sánchez first won the mayoral election in April 1979 as a representative of the United Workers’ Collective, a Communist farm workers’ organization that promotes government through popular assemblies and believes that Andalusia should be independent from Spain. Over the years, the residents have occupied farms, picketed government offices and held hunger strikes to demand work and land.