According to ElEconomista newspaper, only Ryanair and Vueling have passed on the cost of increased landing fees at Spanish airports to their customers.

So yes, if you’d flown with a better airline you’d be happier and have paid less for the ticket. Makes you think, eh?

Landing fees went up by an average of 19% across Spain on July 1st, although Madrid and Barcelona both went up by some 50%.

None of the other airlines operating in Spain will charge customers who bought their tickets before the increase was announced the difference.

Ryanair, who serviced 13,2 million passengers in Spain last year, has been accused of charging customers credit cards the difference without due notice, and customers have been complaining that they have not been given any option but to pay or not fly.

Finally, here’s a gratuitous Ryanair picture I found on the web: 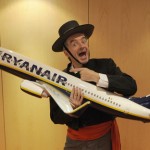