IVA will change on the 1st of September.

In an effort to slash 65 billion euros out of the government spending over the next two years, Mariano Rajoy, PM of Spain, today announced in front of Congress one of the most sweeping reforms ever laid down in democratic Spain.

However, the IVA effect is to be balanced out for companies by a reduction in the cost of employing staff. Social security contributions paid for by the employer will be cut 1% in 2013 and an additional 1% in 2014.

Rajoy started the speech by stating that “we cannot yet start to talk about growth or improvement” and ended the speech with the dire warning that the worst is yet to come for the Spanish economy.

The news came at the same time that AENA, the airports operator, announced that it saw a 4,6% drop in passenger numbers in the first half of this year, having carried out 90,14 million trips.

IVA rates across the EU (click to make it bigger): 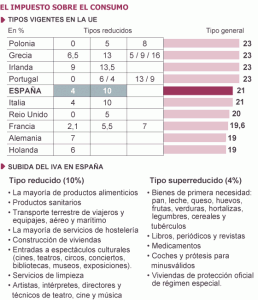