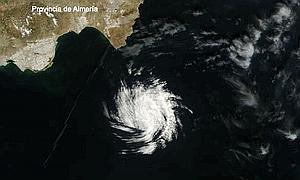 Like it? It’s called an alborino and it’s a special cloud formation sometimes seen in the Alboran sea off the coast of Almería. It’s caused when the poniente winds hits the levante wind, causing a mini whirlwind up the sky.

The big splot on the coast, by the way, are the greenhouses of El Ejido.

PS – don’t confuse with albariño which is of course the delicious crisp white wine from Galicia!

One Reply to “Fun cloud spotted off the coast of Almería”