Murcia region and the Ministry of Development have confirmed that they signed last night an agreement to transfer control of the new Corvera airport to AENA, the airports operator, which is expected to transfer all operations to the new centre in 2012. Murcia region has furthermore said that the two airports “will not compete” for civilian flights.

This is expected to mean that San Javier will cease all civil operations by the middle of next year (when the new Corvera airport finally opens) and return to just military use. The Ministry of Defense, which owns San Juan and sublets some capacity to the Ministry of Development to alllow civilian flights,  says it has no plans to close the airport and will continue to use it for military purposes.

Corvera is 30km away from San Javier airport, just below Murcia city.

San Javier has lost some 700,000 passengers a year to other airports over the last three years, although it still serves some 20 airlines, and Murcia region hopes that the brand spanking new Corvera airport, closer to the city and will good access links, will help the region regain international destinations.

Here’s a map (click it for a larger image) 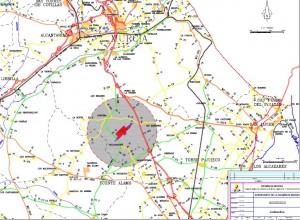 From here, it’s closer than San Javier, but takes longer to get to. San Javier is 144km (1h 27m) whereas Corvera is 139km but 1h 28mins. (From Google maps). You have to turn left at Cartagena and head towards Murcia.