The Spanish post office is running out of ideas for stamps was my first thought when some letters arrived with two MSN messenger lookalike icons hugging each other, under the slogan “for respect on the net” (por el respeto en la RED). Shortly afterwards another one arrived, an icon of someone using a mouse with a sinister shadow in the background creeping away. Soy lo que hago proclaims the slogan (I am what I do).

Hunting around on Correos.es, I found out that these are part of their “civic values” emission of stamps. Other ones in the series include “Wear your seatbelt”, and “Keep your city clean”. 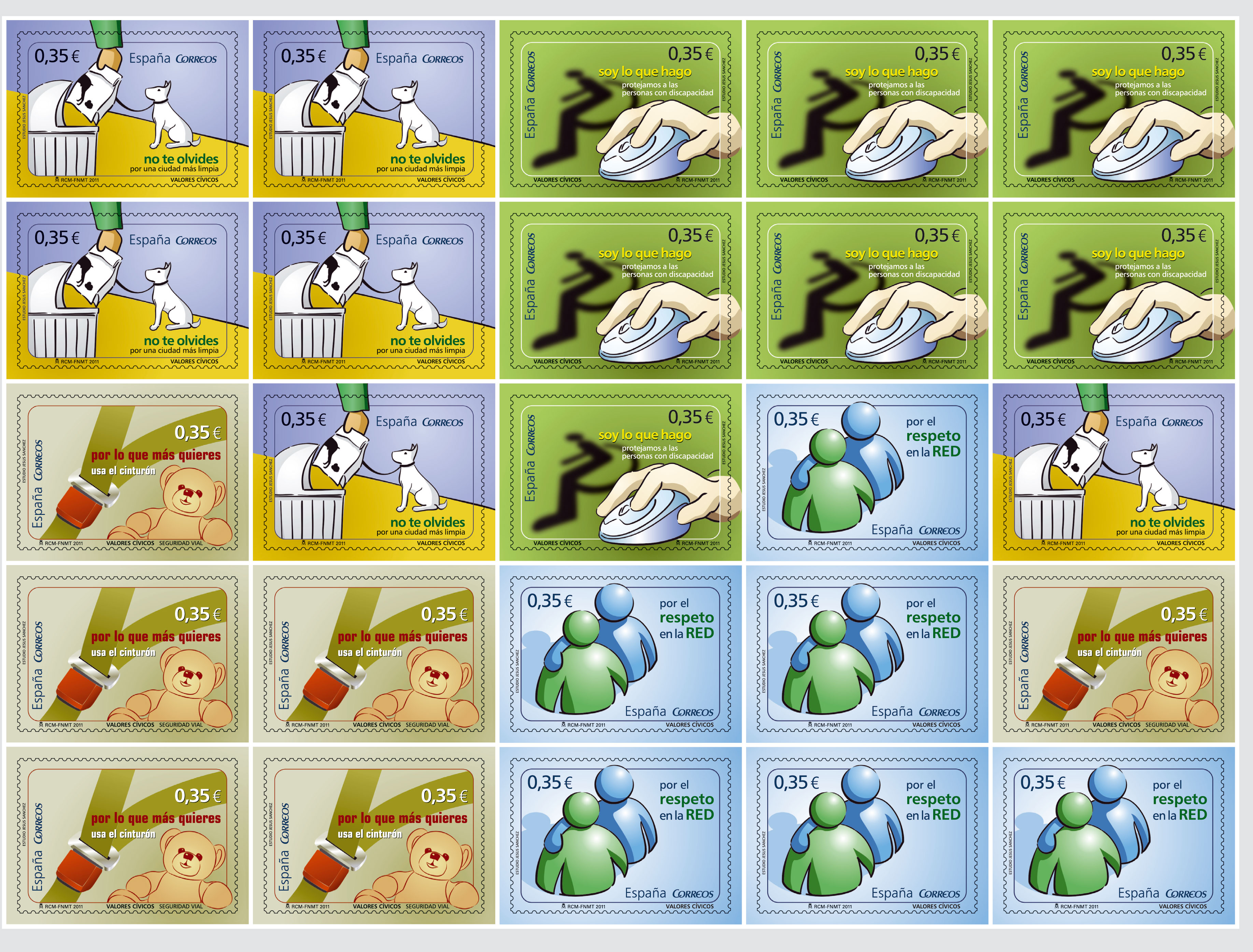 “Protection of Persons with Disabilities, Respect on the Net, the Use of the Safety Belt and Keep your City Clean are the four stamps of this year’s Civic Values issue” trumpets Correos.

However, I can’t see a stamp for “protection of persons with disabilities” in the example?

The rights and freedoms of individuals should be enjoyed by people with disabilities on an equal footing. For this reason, governments are to promote, protect and ensure the full and equal enjoyment of all human rights and fundamental freedoms by all persons with disabilities, and to promote respect for their inherent dignity. United Nations, through the Convention on the Rights of Persons with Disabilities, provides a set of guiding principles that underlie the Convention: Respect for inherent dignity, individual autonomy including the freedom to make one’s own choices, and independence of persons, non-discrimination, full and effective participation and inclusion in society, respect for difference and acceptance of persons with disabilities as part of human diversity and humanity, equality of opportunity and accessibility.

Respect on the Net is one of the issues in which the EU has legislated regarding the behaviour in the use of the computer network. The initiatives are aimed at protecting copyright and encouraging the use of the network as a platform for the Information Society. Responsibility, tolerance and respect are the main principles to be considered.

Fasten Your Safety Belt when getting into a car is the best choice few can all make. The purpose of its use is to minimize the effect of a collision and being thrown from the vehicle, saving many lives. Under the rules established in the Traffic Act, belt use is mandatory for both driver and all passengers including those sitting in the back seats. Children under three years travelling in the rear seats must use appropriate restraint systems for their height and weight.

“Do not forget, for a cleaner city” is the message featuring on these stamps highlighting the importance of keeping our cities clean. The place where we live and the streets we walk through should be respected by of all citizens. Using the litter containers in accordance with the recycling regulations, preventing graffiti on walls and doors, making use the bins and keeping the streets clean are some of the citizenship obligations.

The stamps have been designed by Studio Jesús Sánchez.

Leaving aside all this badly translated nonsense (it’s from the English language section of their website!), it seems that Correos has cottoned onto the fact that people pay lots of money for stamps, and is happily publishing as many as it can get away with to flog to fools with pocket money around the world. So far this year, they’ve printed 28 collections, ranging from “Spanish tourism” to the Alhambra to “Efemerides” (a celebration of the 105th anniversary of the Special Tax on Property, not a birthday I personally celebrate with much joy). 300,000 of these stamps were printed.

Despite getting a lot of mail, I rarely seem to get a letter with an actual stamp on it, which is what made me pause in the first place. Most letters seem to be franked, or sent online – you send your letter to Correos, they print it out, stamp it and send it for you (saves all the queuing at post offices).

One Reply to “Correos runs out of ideas for stamps”