A few years ago, when Spain was rolling in money, politicians were getting rich and builders even richer off the wealth of the happy foresteros flocking in from the UK and Germany, and it seemed as if the good times would never end, Spain decided to try out a law that had been on the statue books for two decades but never implemented, the Ley de Costas. This basically meant that the only reason people come here, the beach, would be off bounds for anything interesting, in case the Spanish military needed a 250m firing line to defend the coastline. Chiringuitos would be bulldozed, and all homes built within 200m of the high tide water mark would be nationalised, and earmarked for demolition once the (now not so rich, nor happy) foresteros pottered past the Great Barrier into futures unknown. Or in 60 years, whatever came first.

El Ejido (the town where the mayor stole all the money) spotting a way to quickly make some more cash, tried a bold and innovative experiment. I shan’t touch on how the contracts were awarded to friends, nor the “commissions” involved, nor how the whole thing let the crooks buy another Ferrari and a Rolex.

Basically, they closed down any bars along the coast between Puntas Entinas and Almerimar, did up the walkway a little bit (not bad, actually, I’ve walked it) and whumped up a half dozen futuristic monstronsities they called “21st century chiringuitos” in Almerimar, and another three in San Miguel. Only problem was, that three of the damn things were never finished, and remain half built. The 2,4 million euros was spent (where?) but Dizu, the construction company, claims they never got paid, and still has El Ejido townhall in the courts for the cash. 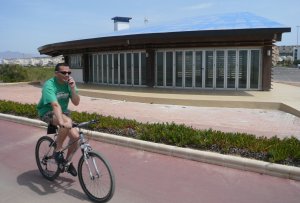 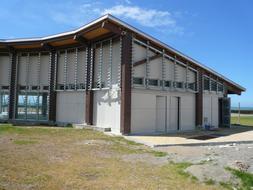 Anyway, due to high rents, and the fact that most of them are in the middle of bloody nowhere, the project never got going. Even with a change in the terms, only four of them were actually ever leased.

Annual rent is €22,000 (inflation linked), despite the high season only being for a couple of months in the summer. The rentee can “improve” on this rent if they want to improve their chances of getting in!
The renter must have at least 12 years experience in the catering trade (as demonstrated by economic activity, which basically means self employed only).

You are expected to obtain and pay for all licenses yourself (even opening licenses!). An annual insurance policy is specified which the Chamber of Commerce reckons is double what is required by law.

€12,000 must be deposited as a fianza, returnable at the end of the rental period (and inflation being what it is, it ain’t going to be worth €12,000 in a few years). The rental period is for a minimum of 15 years, with a potential extension of a further 10 years. So if you go broke in your second year… you lose the €12K, plus penalties.
Plus staff costs, equipment, seating, and all the rest of the costs.

“Almerimar is not Torremolinos” says the Chamber of Commerce, “and this is ridiculous”. So far, the only interested parties seem to be large companies. Which means we’ll (well, not me, maybe Chris will) end up with nasty, expensive, tacky, unloveable chain bars along the beach.

Where was I? Right, the failure.

The new townhall of El Ejido has come out and admitted the project was a complete disaster. Most of the bars are located in the wrong areas, and there is no interest in leasing them. So Luisa Barranco, the new Councillor for Tourism for El Ejido, in a suprisingly pragmatic move, says the townhall will consider “any reasonable use” for the chiringuitos, whether it be for a bar, restaurant, nightclub, beach equipment, library, jet ski hire, brothel, whatever. “We want to improve services across all of our beaches, and intend to have all 9 units in operation, whatever be there final use, by Easter 2012” she has promised.

She has also said that any company that is interested in taking over the half built units will be permitted to finish them off “as required for the use projected for the unit”, and the cost of finishing them could well be written off against the monthly rent, adding that the townhall won’t put a red dime into finishing them. Asked about the legalities of finishing off a project that is currently being dragged through the courts for non-payment, Luisa airly said that the properties belong to the townhall, and Dizu can’t touch them.

A pragmatic solution for a complete cockup, anyway.