Because we have muppets like him in charge, who can’t even be bothered to stay awake during the annual Debate of the Nation in Parliament (he’s the Minister for Public Works & Development). It’s not as if we’re not paying him to at least stay awake during working hours… 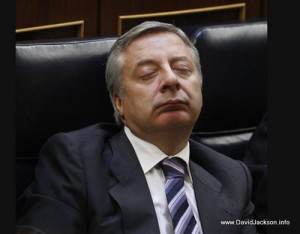 Maybe he’ll claim it’s because he was working so hard. Or that he had his eyes closed to concentrate on the ramblings of ZP. Or maybe he was dreaming of him being in the hot seat, telling Spain about his grandoise plans….

Either way, it’s a pretty apt image to illustrate how this government doesn’t really like having to work with other people, or explain what it’s up to.

One Reply to “This is why Spain is sliding towards the pit….”