Here’s a post to refute to anyone who claims that Francisco Ortega and his bunch of merry men have improved Turre in any shape, size or form over the last few years. Just the latest PSOE crook bleeding the place dry, much like the previous Paco who was another vulgar, unpleasent, annoying power hungry crook. Ortegas own great-aunt won’t vote for him, she’s so disgusted by some of the things he’s done in the past….. ah hem.

I mean, he can’t even keep the pumps running to give us a constant supply of water. He gets a 55,000€ grant from the government and what does he do with it? Buy a new water pump? Fix the billing system so that people who enjoy Turre’s rancid water must pay for it, ensuring a revenue stream to improve it? No, he installs a crappy CCTV system that isn’t even hooked up to anything, and never will be as they need another xx,xxx€ to finish it off. But I’m sure he enjoyed his 10% cut from the installation company.

A photo taken just up above the school, near where children play, and behind the Cabrera bowling green. 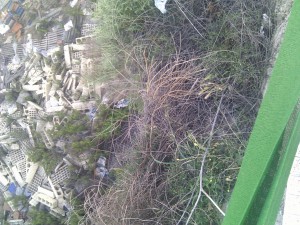 And here is the townhalls solution to the danger: 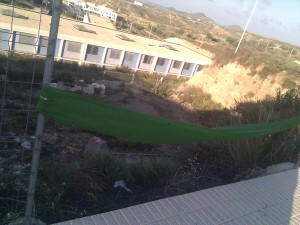 That’s the school in the background, by the way. I happen to know that at least one of the teachers and a couple of the parents have complained to the townhall about this, seeing as to how kids do play up there, and their solution has, apparantly, been to put a plastic tab on the green strip of netting (enlarge photo, you can see it) to stop it blowing away like the last one did.

Oh, and here is one of the spiffing new streetlights nearby: 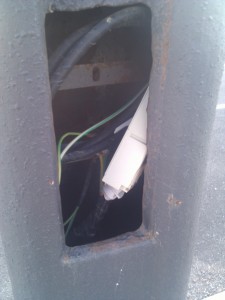 Tempting to touch…. I very nearly did myself. The streetlights go on at night, by the way.

Of course, his main rival (and tipped to win) Arturo Grima (PP- a man you can trust proclaims his banners) was banned from holding public office for six years and day in 2000 after being ejected as mayor after being caught “abusing public office” (I forget the exact details of the case, something about rezoning his own land). A man who happily sold a number of houses and land that would shortly afterwards be expropriated for the AVE, we assume that as mayor he knew the path before anyone else did and did the sensible thing: ie, flog it for the highest price he could get. He’s also a fat, sweaty bastard who was spotted on Canal Sur the other day, sitting in a plastic chair whilst the Andalucian leader of the PP, Javier Arenas, addressed the nation, with legs apart and picking his nose. Doesn’t seem to slow him down, and I expect he’ll get in again, or at least until the other lot get together to eject him, as they did before. At least, as a man with property interests in Turre, he has an interest in making the place look nice, and did more in his 5 months as mayor after the previous elections than the PSOE lot have in three and a half years afterwards.

So that seems to leave us with Izquierda Unida, whose leader Martin is a lovely chap who works hard for the town he loves but who I personally doubt is able to lead a town.

Francisco is now yelling about the fact that the Junta has promised to finance the new Avenue. It’s worth pointing out that he’s personally delayed the Avenue project for over 14 months to ensure that it was announced just before the elections, and if you look at the wording from the Junta, it doesn’t say we’re going to build the Avenue, it says we will speed up the decision process to investigate the contracting out of the Avenue, which jez ain’t the same.

Of course, Turre is so bankrupt and in debt that whoever does get in probably won’t be able to steal a cent, as the coffers are empty.

So, yeah, if you own property in Turre, you’re stuffed.

5 Replies to “How useless is the PSOE in Turre?”