Rubalcaba, first Vice-Minister of Spain, a man who looks like a gnome with cancer, and tipped to be the next candidate of the PSOE for the 2012 general election if Zippy’s fingers can be prised out off the red button, has been in town visiting Vicar and Pulpi (both PSOE marginals). He was received, according to La Voz, by multitudes, “some more effusive than others”.

Here’s todays political cartoon from La Voz. Funny stuff. Whatever they’re paying that cartoonist, it’s probably too much (click to make it bigger). Diego is, I assume, Diego Asensio, the provincial PSOE sec-gen and senator for the province. 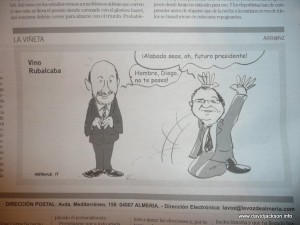