It was one of the hot January days that Almería is famous for. A mild breeze, a hot sun, not a cloud in the sky, and the thermometer reading 21ºC.

Meanwhile, London is drowning and icefloes are damaging bridges along the Rhine. Wonderful.

And after a hot morning spent moving office furniture, lunch was suggested and seemed like a decent sort of idea that was worth examining further.

It must be plain, and simple, yet leave the palate content.

It must be three courses, and ideally, wine or beer included, along with water, bread and a salad.

It must a siren call to the local navvies and lorry drivers, yet be of a standard, and in a locale, that a besuited gentleman need not blush as he sits down to share in it.

Service must be quick, the food must be hot, the plates must be clean and the bread must be rough yet soft.

Seems simple enough, yet so many places fail to do it. The Milindurrio in Antas serves a decent one; so does the place in the centre of the Antas trading estate (owned, I believe, by the Milindurrio lot), the one next to the Galasa offices and Maria’s Bar Sopalmo.

All too far. So, we decided to stay home and go to the Coliseo in Los Gallardos.

Let me tell you now of a tale of three brothers, known as the hermanos Ramos. All three dedicated themselves to the building and road making trade, and were quietly succesful. Indeed, the Ramos taller, which stands in front of Los Gallardos, is a siren call to the mechanic and building trade for a new generation.

The younger Ramos, who also specialised in buying up trees that were to be knocked down and then reselling them, decided however that this was not the life for him and, on a piece of land passed down through some circuitious path, opened a mock Roman gladiator disco on the outskirts of Los Gallardos, on the way up to Bédar.

Being a builder, it was quite easy to put this together; a large warehouse was erected, and some fake walls and pillars slapped up. The youth were lured to this place via loud noises and flashing lights, and everyone was happy, for a few weeks.

I think we all know of the long and bitter war fought between Gines and a local English couple, who objected to the noise. The letters, the complaints, the denuncias, the threats, the indicident with the donkey. We pass lightly over all this, for it is not our business and we have little interest in what happened during that long hot summer.

Anyway, eventually the place was reorientated towards the casual diner, rather than as a mainstream disco. Terry Horrocks, it seems, cannot praise the place highly enough. So, in we were lured.

Actually, a surprise. The building itself is very nicely done, and ready to turn into a nightclub at the first opportunity. An outside courtyard, with false grass, allows diners and drinkers to enjoy the local atmosphere. 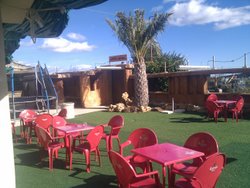 The place, being designed as a disco, is full of nooks and crannies, and I imagine that when used as a disco changes a lot, but it’s cunningly turned, during the day, into quite a decent restaurant. 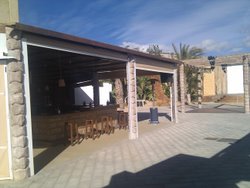 As you enter, you find a large room divided into a bar and restaurant area. We, as is natural , veered into the restaurant, where we could just see, over the screen, a large TV showing a news programme about a bear in the north of Spain. 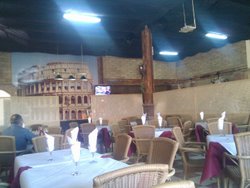 Now, a word must be said about the waiter here. He neither rushed nor panted, was neither inefficient nor sweaty. Instead, he ambled around, taking down the orders, serving the meals, keeping an eye on the tables, and in general, was quick, efficient and cheery. The man was a joy to have as a servant, and an appropriate tip was later left for him. He should be sent out into the local bars and restaurants to give advice on how to be a waiter to all the usual surly bunch of inefficient teenagers that seem to be working everywhere today. 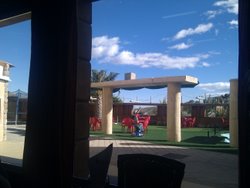 We sat in between the window and the seperate sala de fiestas. 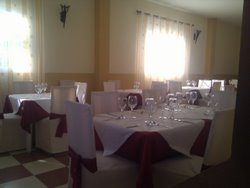 Lunchtimes, the Coliseo restaurant serves a menu del dia, which we all opted for, although the main menu is still available. Three starters (cocido, empanada, ensaladilla) and four main courses (solomillo, mero, merluza and something else) to choose from. I had the cocido, which was a proper inland cocido; none of this fish stuff that you seem to find on the coast. Garbanzos, bit of jamón, vegetables and chicken. Lovely and fresh.

A great salad, and fresh hunks of newly made bread were provided. I remember once in Valladolid, being served with a large hunk – and I mean a huge hunk- of fresh coarse white bread. Delicious, but the serving of it was that a chap came round with a loaf torn into bits and, using his hand, tossed these bits onto the table for you. This appeared to be cut with a knife and was provided in a basket.

The main course was solomillo in a vegetable mushroom sauce and chips. A lovely bit of pork.

Pudding was a homemade fresh flan and a coffee.

A bottle of wine and a bottle of water, and two beers, were thrown into the mix.

Now, if you don’t speak Spanish, you could be a bit stuffed as you won’t know what the waiter was offering you.

And if you’re a vegetarian, or on a special diet, or a fussy eater, or a ponce from the better parts of London, it’s entirely possible you will leave the place feeling somewhat hungry and ripped off. But if you are any of those things, you probably aren’t living here, or at the least have come to be used to the local cuisine.

It’s food. It’s damn good food, at an even better price. In nice surroundings, with pleasent company, with the hum of a busy restaurant around you, nice music on the stereo, and you can take all the time you want over it, under the hot January sun.

And to me, that’s heaven.

Restaurante Coliseo
On the road up to Bédar behind Los Gallardos, about 1k out of town.