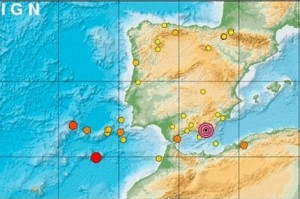 The province of Almeria has seenin the last week twenty-seven small earthquakes of between 1.5 and 4.1 magnitude on the Richter scale, most centered around the capital and Western Almeria.

The last of these earthquakes, with a magnitude of 2.4 degrees was recorded on Monday in the town of La Mojonera, about twenty kilometers from the capital, and has been slightly felt in the epicentral area.

Last Thursday saw the most intense earthquakes with magnitude 4.1 and 3.6, which were felt by the population of the capital and towns of the West Almeria such as Adra, Berja, El Ejido, Roquetas del mar.

Most earthquakes have been recorded north of the Alboran Sea, very near the coast so they could more easily be perceived by the population. Almeria is an area of high seismic activity and microterremotos are relatively common.

The province recorded at the beginning of last July another similar episode in which were recorded over a hundred movements with a maximum magnitude of 4.3 degrees.

Experts point out that these small earthquakes allow periodic release of energy, so they avoid their accumulation and subsequent discharge into a large earthquake, which is nice.