I received this sad email from Sue and John Sephton: 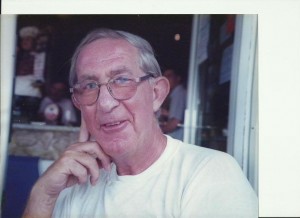 Over 80 members and friends said farewell to Cyril on 28 October 2010. Also present were Cyril’s stepson, Steve and his wife Jo, plus friends Dave & Sheila (ex Los Amigos) and George.

Roy Hatten spoke of Cyril’s time as a member of the Club for the past 12 years and since the Club moved to Turre, as committee member and Bar Manager. Cyril was always first at the Club to open up, to put the equipment out on the greens and to put the kettle on. He was always ready to lend a hand wherever needed, and was a good friend to us all and a very ‘gentle’ man.

His stepson told us of his time as a postmaster prior to moving to Spain 13 years ago with his wife Daphne who unfortunately died in 2000. At his funeral in Swindon in October some of his old customers attended because “Cyril had always looked after them so well in the Post Office”.

Cyril will be a very hard act to follow and we will always remember him.

Cyril died in September after becoming ill with cancer a year ago. He moved back to the UK in the Spring to be looked after by his family.