So today’s the first full day of school for the new Cabinet after ZPs’ night (or morning) of a thousand long knives yesterday.

Ousting the PSOE power base, he has shuffled his best friends up to the top positions and cleverly moved a few obstacles into ministerial posts where they can concentrate their talents on messing up the country and not his political power base.

Leire Pajín, a woman alledged to earn €15,000 a month (pictured below, waking up from a kip in Congress) has been shifted from her position as Sec Gen of the PSOE party to the portfolio of Health & Equality. She was briefly spotted wearing a PowerBalance bracelet late last night; the PowerBalance is a con bracelet, briefly famous over the summer, denounced by FACUA and other consumer organisations as “a piece of tat being sold as medicinal”. Twitter exploded into cries of rage as people asked A) why she’d only just jumped onto this fad when it was, like, so last August! and B) why was the new minister of Health wearing a product her own ministry had agreed was pretty but useless with no medical value whatsoever? A brief note: the new sec gen of the PSOE is a chap called Marcelino Iglesias, the President of Aragón – hopefully, the aragonés will keep him too busy to actually get in ZP’s way. 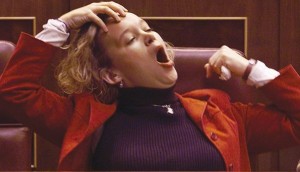 Bibiana Aido, a woman who was handpicked by ZP to lead his new Ministry of Equality (it closed its doors yesterday, another victim of the recession) had been sidelined and returned to the great darkness from whence she was picked. A brief and entirely un-noticed three years in power, at the head of a government department dedicated to doing… exactly nothing, other than fund leaflets urging you to shop your neighbour if you suspected him of being a wife beater. An important task, but did we need an entire government Ministry to do this? ZP agreed and cut the thing, along with the Ministry of Housing, another fad ministry setup at the beginning of la crisis to try to help promotors sell homes. Both will be absorbed into Health and Development, respectively.

Valeriano Gómez is the new head of Employment. You’ll remember that Celestino Corbacho resigned in tears last month (after, the cynics noticed, he ensured a nice juicy position as number three on the PSC lists in Catalunya, just ahead of the Generalitat elections) sobbing that la crisis wasn’t his fault and he didn’t know why people who couldn’t find jobs were picking on him. “Spain knows this is not my fault” he intoned on SER in a now famous interview, “and the Spanish will, I hope, remember me as fondly now as when I first took up this job on a wave of optimism”. Valeriano was, it is rumoured, ZP’s first choice to replace him, but trouble brewed when this left wing unionist was spotted marching in the streets with his UGT buddies during the General Strike against the labour reforms he’s now in charge of implemanting. However, a month later, he seems to have changed his tune and is now in favour of these reforms. He is rumoured to have stopped dying his hair and moustache after a magazine pointed out it made him look like a second rate Hitler impersonator, an image I saw repeated last night on TV. Uncanny.

Rosa Aguilar, who used to be the Mayor of Córdoba for the Izquierda Unida coalition (she belonged to the Communist Party of Spain) is now in charge of the enviroment. She’s a bit of a wildcard, as she’s an independent who doesn’t belong to the PSOE and says she never will, even if she has fallen out with the Commies.

Rubalcaba, the chap who looks like a cancer ridden gnome, is now the strongman of the government after the wonderfully named Maria Teresa Fernandez de la Vega Sanz was shown the door. Maria Teresa, the “headmistress of Spain” was a firm old bird who was Vice President, was technically the first woman to lead a democratic Spain (she took the reins when ZP went on holiday) and was generally approved of. Possibly, she rode too close to the power base and ZP decided he could do it without her – she’s been given a nice position on a government quango and sidelined. Rubalcaba, a man who for years has been in charge of the Interior Ministry (he entered government under Felipe González for heavens sake) was approved of for dealing firmly with ETA and almost reaching a peace deal in the Middle East in the 90’s. He’s now the head honcho in Government, ZP’s bully boy if you will. He’s also the holder of a doctorate in Chemical Sciences.

For the new Ministers, see El Mundo or other Spanish news sites.

ZP has been criticised for making these changes so quickly and for consistantly denying his intentions. Only last Sunday he denied he was planning a cabinet reshuffle on a radio interview. Yesterday morning, when the first rumours were sweeping the nation, he shrugged and said “I don’t know” when asked what was going on (he later said he could not inform the nation before he informed the King and the Government).

“This is a new Government, renewed and politically stronger, which is needed to ride out this Crisis” he intoned on TV. Critics says that he had to remove a few troublemakers in order to secure his position and took the opportunity to sweep out the rest. It’s probably a bit of both – the only thing sure is, only one person has managed to stay with him since his first government in 2004, the Iron Dame Elena Salgado.

For more on the reshuffle, see New Spanish government in cabinet reshuffle.

Of course, the reshuffle comes at a handy time – people seem to have forgotton the fuss over the 2011 budget -pushed through at the expense of Madrid devolving even more powers to the Basque country and the Canary Islands- and the new Spanish smoking ban which is expected to come into force on Jan 2. No more smoking outside if a kid is present, chappies!

I wonder what else he’s published on the sly when everyone was looking the other way?