El Pais has discovered that the US government will not continue to pay for cleanup efforts or continuing blood tests for the 1,500 people who live in Palomares.

The US government pays some 314,000€ a year to the Spanish government to control the effects of the nuclear spill in the village, caused after a long range US bomber equipped with nuclear bombs crashed there in ’66. At least one bomb split open, spilling radiation across the village. Locals believe this is why the people of Palomares tend to be large and hirsute, and their vegetables larger than normal.

If you go round the back of the touristy area, you will still find a cordoned off area with lots of “danger – nuclear contamination – stay out!” signs. Building is, of course, banned in that area, but ironically enough tourist homes have been built right up to the wire. Rather you than me, mate.

The US cleared a lot of land in the area and shipped it back to the states – which is why the land around Palomares is 100% flat- and agreed to build a desalination plant in compensation. The desalination plant was never used, but bought the first Yanks to live in Mojacar.

One of the bombs was lost in the sea, causing a frantic race between the US and USSR to find it. A local fisherman eventually told them where it was. This famous photo of Manuel Fraga (then Minister of Tourism) and the US ambassador to Spain swimming in the sea “to prove it was safe” is widely reputed to have actually taken place further down the coast in Carboneras (Fraga was many things, but not keen on swimming in plutonium): 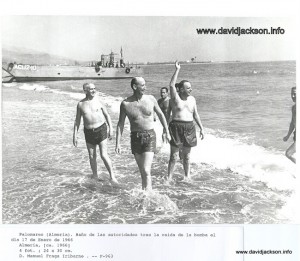 Spain continues to ask for 25 million euros to finish removing the plutonium and ship it back to the states (Spain has no facilities to dispose of the stuff). The US doesn’t think this is necessary, but hasn’t ruled out “technical assistance” if necessary.

One Reply to “US ends Palomares nuclear cleanup payments”