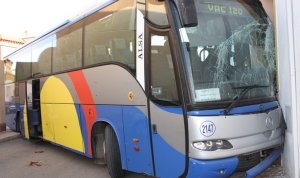 It was always doomed to failure. A chap in Pulpí thought it would be great fun to steal a bus, but sadly lost control and drove into an apartment block. It seems that at 6,30 this AM, someone hotwired the bus from where it was parked outside the DIA supermarket, and tried to drive it through town. Problem was, there was no way it could fit through the narrow streets the thief was trying to take it. 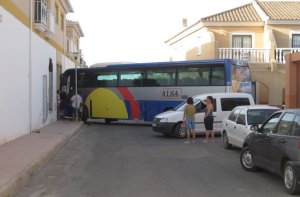 Neighbors who heard the crash called police, who later found the real driver wandering around outside DIA looking for his bus. The ALSA bus was the usual Pulpí – Almería bus; the driver had parked it there last night at the end of his shift.

Police are baffled as to A) why anyone would want a 56 seater bus, B) how he got it started and C) why the idiot tried to take it through the centre of Pulpí instead of out the main street. Nobody was hurt in the crash.