It was 9,30pm on Friday night when plans changed and the in-laws decided to dine out. Early for a Spanish family.

When asked where he wanted to go, the brother-in-law replied firmly “anywhere with good meat”. Given these instructions, I could hardly fail to recommend the Cortijo Albari in Vera.

Given the time, I thought it prudent to call ahead and warn Carlos of our imminent arrival.

“We’re full” was the abrupt reply to my call. “Not a chair free in the place”.

“Come on” I wheedled, “it’s David Jackson here, and it’s a special occasion”.

The waiter I was talking to didn’t have a clue who I was, but the special occasion bit convinced them. No, I jest. We go there a lot.

“It’ll have to be indoors” he warned me.

When we piled up and parked, we realised the anonymous voice on the phone wasn’t joking. The place was packed, inside and out.

Frankly, eating indoors at the Cortijo Albari is not a hardship, as long as you avoid the room where they cook the meat (except in the winter, best seat in the place, close by to the roaring fire). Large, climate controlled and interesting things on the wall to look at. We piled in. 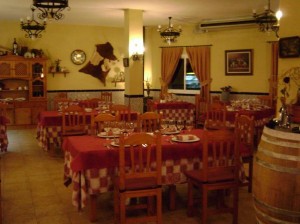 Now, I think that the service that night was an example of how to run a service that is overbooked with insufficient staff. Yes, the service was slow, but we warned in advance about the delay, nibbles were provided, and care was taken to bring out everything at once, instead of higgly piggly. Unlike the usual technique most place employ, which is forgetting which table is on which course and sending out plates bit by bit. With good conversation, and even better wine, who cares about a measly delay in getting the food out?

The Albari terrace, although pleasant and surrounded by pine trees, does have one drawback – mosquitoes. However, they don’t seem too bad this year. We were indoors, so we weren’t worried, but we’ve had a couple of experiences there when we thought we were in the middle of WWII dogfight. 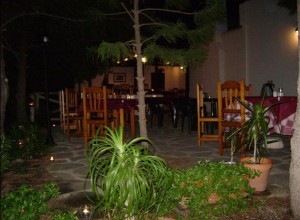 Carlos and Carmen concentrate their efforts on one particular subsection of cuisine : meat. It’s not Argentine, it’s Spanish but it’s the best you can get and it’s better than almost any Argentine freeze packed stuff. The chuleton de buey, which is basically a Spanish Chateaubriand, is, despite being buey, melt in the mouth. Carefully carved and served at the table by Carlos himself, this is not a meal – it’s an experience.

Around the meat, you have a selection of typically northern Spanish starters, and a delicious foie which comes gratinated and on biscuits, to be piled high and then devoured. This particular duck did not, shall we say, die in vain. Salads, anchovies, meats and other dishes adorn the starters menu. The best plan is to order several dishes to share, then a main course.

Carlos is a pretty decent sommelier, and has a damn good wine cellar there.

Half way through the meal, just before the buey was carved, Carlos suggested that we move outside as a table had just become free, in order to enjoy the show.

“The what?” I asked, baffled. But it turned out he had a magician on.

The magician, by the way, wasn’t the reason the place was busy. This was a mere incident happening in the background. But we went outside anyway.

The magician was rather rubbish, but it was more of a comedy act than a magic show, and we enjoyed ourselves immensely. In fact, it was close to 3am before the show ended and we left.

Carlos later explained to me that he’s putting on a different show every Friday throughout the summer. Next Friday is a flamenco act.

So, to summary. The best meat restaurant in Almería, by a long shot. Down a long windy road between Vera and Garrucha. Fairly expensive, budget (with wine) 50€ p,p, plus a taxi if you’re going far as the cops sit at either end of that road waiting for you. Worth every penny. Leave vegetarians at home with a carrot, they wouldn’t like it.