Alas, the perils of living in a culinary wasteland.

Food options in Mojacar are, sadly, limited. Even while living in Brittas Bay (Co Wicklow) I had the option of Dublin just up the road.

And no visit to the family’s UK base of operations is complete without a trip to the Thai Emerald, Cirencester (one of the best in the UK, to my mind).

But recently, my taste buds have been neglected. Spanish or Italian seems to be the order of the day. Yes, our local Sushi restaurant in still open, but raw tuna on rice just doesn’t do it for me anymore. I have to go to Asahi in Almería to get anything more exotic. Or, if they deign to open their doors, the Youet (Almería’s best kept Chinese secret).

So just for a laugh, we tripped into the Cowboy Cocina. A delight to all the senses, including, and this is rare, visual.

If you’ve never been to the Cowboy, you should, just for the amazingly well thought out decorations. Imagine, if you will, a typical “Yankee” themed restaurant. Let’s take, for the sake of argument, TGIF Fridays.

Well, Cowboy Cocina is like that, but tastefully done (inasmuch as such a theme can be “tasteful”). Object acquired and carefully positioned. Nice posters and photos, many to do with the Spaghetti Westerns they filmed in the area. Not too sure about the dead buffalo on the wall.

If you want to, you can sit outside on the roomy patio and watch the traffic go past, whilst also admiring the old wagon wheels.

I mean, just look at these bar stools (click for a bigger pic): 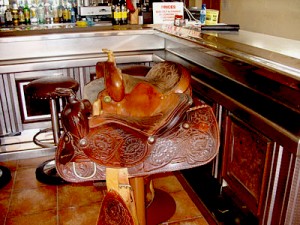 I’m easily pleased. The second I saw those chairs I knew I’d like the place.

Kenny, who owns the joint with his wife Catherine, is a wild west enthusiast. He loves the wild west, and wishes he’d been born a real ole cowboy. (He’s from the midlands, I believe).

He makes a wild homemade BBQ sauce, and Ric P., a man who knows all about America, assures me he once entered a BBQ sauce competition at Elvis’s Graceland mansion and came second. Good enough for me.

The food is southern style BBQ, properly done (ie, fresh and made with loving care), in some sort of smoke pit. I didn’t understand the technicalities.

The burgers are enourmous and tasty, as are the steaks (no freezers here!). The ribs are to die for.

Let’s be honest. You don’t usually go to a place like this for the food, as it’s always burgers, steaks and ribs covered in sauce. You go for the ambiance. And this place has that in shovelfuls.

Kenny is knowegable about the wild west, and an authority on the spaghetti western film industry that used to exist in Almería. If you have a question about the films, go and speak to him. He’s also pretty good at whipping up a party.

And surprisingly enough, I’d probably go back for the food.Where else can you eat so much for so little and enjoy it so much? 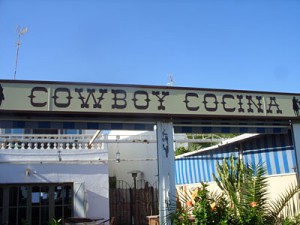 Half way along Mojacar Playa, on the beachfront just before you go up to La Parata.