INE – the government number crunchers – have released their monthly tourism report for Almería. 85.115 tourists stayed in the province during March – 32,000 less than March 2007, 10,000 less than just two years ago. (source: Ideal)

What’s worse, as tourism figures pointed out, is that Easter, typically a strong period, fell during the end of this month.

Interestingly enough, out of these figures, 60.857 visitors were Spanish, and just 11.944 foriegn.

Actually, I’ve just been looking at the holiday figures for Almería, broken down into the four main holiday areas (Albox, for some reason, does not appear). Mojácar, for example, has had a better April than last year, but is still 50% down on 2006 figures. But the surprising thing is the difference between Spanish and foreign travellers for some area – in Roquetas del Mar, for example, just 1 in 10 of every tourist is a non-Spanish national. Hmm. 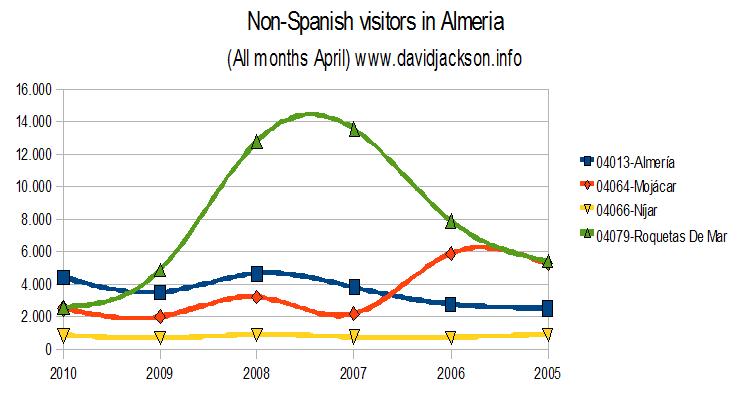 Well, Níjar is steady, but Roquetas seems to have seen the boom years come and gone – it’s now staying alive by being the Andalucian resort of choice for OAP’s on IMSERSO trips. 13 hotels affiliated to this scheme, last time I looked. Full board for 100€ a week? I’ll have some of that thank you – eh, Maria, look at all these guiri bars, I’ll stay well away from them, thank you.

One Reply to “Tourism numbers continue to fall in province”