Today I went to a German restaurant.

A German restaurant? Called “El rincón de Lola?” Has the sun finally addled the lad? I hear you ask.

Well, actually, it was 7ºC and raining (almost sleeting), so no, the sun has not addled the lad. Nor has the wine, since the police crackdown.

Ric P. bullied me into lunch (unfair, really, to insinuate that, as he paid) and we met in Turre. Turre had a two hour power cut, so we said the proverbial “bugger this for a game of boules” and went to Mojácar.

Ric, being a man who knows his food, suggested Lola’s.

If you follow Ric P. in a car down Mojácar Playa for several minutes, you eventually come to a square known as “the square in front of Harmony Gym”. (For both Ric P. and myself, Harmony Gym, and its ilk, is but a simple landmark pointing towards more interesting places). Just in front of Mojacar windows and doors.  Next to the catalogue shop. Got it? Check the map link at the bottom of the posting.

In the aforementioned square is a fountain, no idea if it works, a hire shop which is hiring everything including the office it’s in (se alquila, muy barato) and a few bars. One of these, the big one at the top of the square, is, it seems, where the local Germans hang out. No, I didn’t know we had any, either. Seems they’ve outgrown Roquetas.

Now, I consider myself a well travelled man. A man who, when confronted by the possibility of dog in Xi’an, blanched not. A man, who when given KFC in Don Mueang International Airport, managed several brave bites. A man who survived two weeks of comida Criollo whilst travelling around Cuba before snapping and, British Passport in hand, imperiously broke down the security barrier at the Melia Santiago de Cuba Hotel to get into the Italian restaurant to eat something other than pork (Restaurante La Fontana is a terrible  restaurant, by the way, but the only international restaurant in Santiago I could find that was open).

However, my only experience of German food was two days in the German part of Switzerland. So, presented with the menu, and surrounded by happy Teutons, I was at a loss. The menu meant nothing. It may have well as been in Martian. Have you ever tried to read a menu when really drunk? It was like that, only I was sober. German is not a language with which I am familiar.

I can now sympathise with those poor Brits who flee the Spanish bars to take refuge in pies at the Jimmy’s Place. It’s a bewildering experience to be in (fairly) familiar surroundings and not know what is going on. I was, in fact, in the hands of Ric, who patiently guided me through the menu. I later discovered that he’d found the Spanish translation at the back.

The cook, who I presume is Lola, is an elderly lady who rules with an iron thumb and has several people scurrying around for her. I wouldn’t venture a guess at who is who – suffice it to say that they are a friendly bunch.

There was a menu del dia for 10,50. Three courses. A Sauerkrautsauppen to start with, a selection of main courses and some puddings. One of our party selected that, and had for main course three potato & apple cakes with toppings – one something, the other two herring and beetroot. Interesting. Here’s a pic. 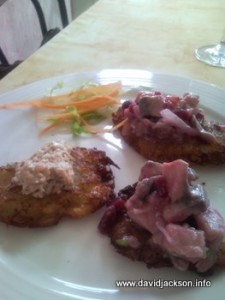 I & Ric had a salad to start. It came with a nice sauce, similar to coleslaw.

We both had escalopes for mains. A meat – chicken I think- cooked in breadcrumbs and with toppings, as if they were crêpes. You get them in Spain, although usually they are drier than the ones served today, which were nicely done. Mine was pepper and onions. Rics was pepper sauce. On the side we had a sort of potato bake. Delicious. 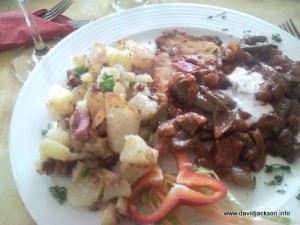 A couple of problems, neither to do with Rincon de Lola: German food is heavy, and generally looks unpresented. It also sounds bloody unappetising. I’m looking at the bill now. Zigeuner Brattiz? Who wants to eat one of those? Well, I do now I know what it is.

Puds were delivered, and the chappie behind the counter cheekily insisted we try a selection of puds “on the house”, which we did. Very nice.

The place was busy for a Wednesday lunchtime. It’s small, about five big tables, all were filled several times, mainly with happy Germans. A table of British ladies came in later on, fresh from their workout in the gym.

Total bill (for three) with beer, wine and puds was 47,70€ and I didn’t have to eat again that night.

It’s not a place for a fancy night out. But for a fun lunch, albeit a big one, that’s cheap, well cooked and damn tasty, it gets my vote. Or for a tapa and a beer. And you can pop into the gym opposite to burn off the fat between courses, should the need take you.