After a recent meeting with Chris (no drink involved this time!) we adjourned to D-bar, which is his local, almost at the foot of Almerimar.

Almerimar is a nice place. Not too touristy, small enough to walk everywhere and has a range of different types of bars.

I was going to steal some photos off Chris’s site but he hadn’t uploaded any good ones, so here’s one of the rather large English breakfast Chris insisted I order. 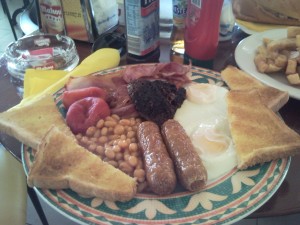 I’m not usually a fan of English breakfasts, and hadn’t had one for about 3 years (last one was probably in Eire..), so it was a novel experience. I never normally eat until about 2 in the afternoon. I ordered it with extra mushrooms and no tomato. Since they had run out of mushrooms I got an extra tomato. Pretty good tho’.

I’m told they have a new menu, and while pretty much English  “pub grub” it’s got a good range, and it’s not overly expensive.

Chris had some chips, the fat bugger. (Despite claiming on his site here that I ate them all). Look at him, squeezing on the ketchup. Disgusting (yet tasty!) 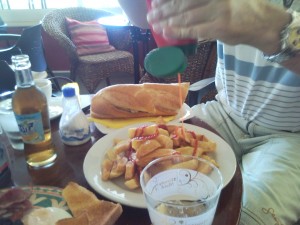 It’s run by John, a large and rather loud ginger fellow who actually speaks quite a bit of sense and speaks Spanish, and his wife, who is Russian (which lets me make a joke about how she Russians around while John enjoys a beer with us).

Nice place, while it’s a bit “benidormy” in look gets a nice mix of locals and tourists (English & Spanish!) and does a decent range of food and drink. John also takes pride in his sauce collection, and claims to have the hottest sauce available in El Ejido.

D-Bar, Almerimar
Up the top of Almerimar, right hand side almost under the cliff.