Aguila is a workers bar in Albox. But by gum, it’s a good one. 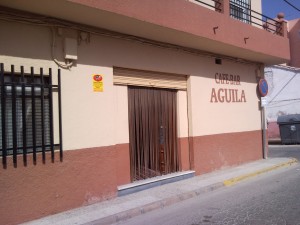 Inside, in a main room, darkened by the windows which are tightly shuttered against the danger of the summer sun, wizened men and worker foremen sit hunched over the bar, drinking their carajillos. A low background murmur from conversation is constantly audible – the minute you look to see where it’s coming from the conversation stalls and you find that the talkers are looking back at you, as if you had intercepted a drug deal (they’re probably talking about last nights game).

Tapas are enormous, and decent. A tercio and what was basically a half racion of magra, together with several large hunks of bread, was mine for only €1,40.

Tapas are limited, but when the plancha is on (middays) the wife will serve you up some damned good meatstuff off the plancha. No menu – it depends on what she’s brought that morning.

It’s not the sort of place women venture into – not because it’s seedy, or because it’s dirty, but because it’s a mans’ bar when men get together for a morning coffee and their wives are wise enough to allow them to pretend they are still their own man. Evidence of this was that the damas was being used to store a couple of bicycles. The lightswitch for the mens was by the door, next to an exposed wire where the (broken) handdryer was situated, great fun in the dark.

In short, my sort of place. Don’t bother going if you don’t speak Spanish, or are adverse to Ducados second hand smoke.

Cafe Bar Aguila, Albox
In Calle del Rulador, on the “incoming” road down from the cementery.