Oh, it’s a form letter. Thought he’d finally seen sense and called upon me to help him through the next economic crisis.

It’s in English, which is nice, and on about ole “strong chin” himself, Juan Fernando López Aguilar, the PSOE socialist candidate to the European Parliament, a man whose chin puts Arnie himself in the shade. As spotted by the PSOE website designer who did this little image:

His expression, which I think is intended to be serious but actually looks as if he’s constipated, rarely varies. “A serious man for difficult times”. 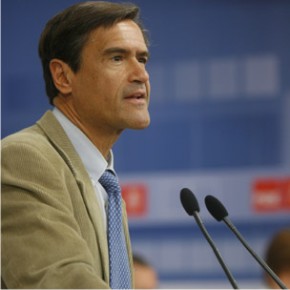 Even when he’s “having fun” he’s worrying about Issues. Calm down man, you’ll develop an ulcer.

Ah! No wonder! It turns out that Mr López, the only serious man ever to emerge from the Canary Islands (he’s from Tenerife, I think), is also a gay pinup! Very liberal. What does Mrs López think?

He stated that his lifetime ambition was to play the guitar with his childhood hero, Spanish guitar legend Miguel Rios. Miguel Rios, being a kindly soul, granted him his wish:

Not to be rude, but I think Miguel should stick to the guitar and Juan to the lyrics (he’s supposed to speak perfect English). I think that’s “Johnny go go go” they’re mangling.

Back to the letter.

I notice that they’ve obviously used a native English speaker (or is it Juan again?) to write the letter, which is a nice change from the normal PSOE policy of “we teach English in schools, don’t we? Let’s use a native to write difficult English” – which occasionally backfires, as we all know.

For some reason they twitter on about America and how her citizens have decided for change and progress, so vote for us. Didn’t realise Obama was a member of the PSOE.

Something about a 65 day working week…blames the conservatives for weak financial markets (no word about who allowed mass building and public corruption to fester..) and about how wonderful the EU is. No mention of the Priors or Algarrobico.

Can’t be bothered to read on. Into the recycling it goes.

Mind you, I’ve just looked at some of the names on the list. Doña Bárbara Duhrkop Duhrkop? Don Mohammed Azahaf Moumen? Are these people Spanish? Here’s a nice aristocratic name: Don Alejandro Colledoforns Bergnes Las Casas. Almost as good as one of my lawyer’s, a chap with the imposing name of Don Joaquín de Borja Fau de Casa Juana Alarcón, a name which sounds as if it should have a couple of commas or at least a teabreak in the middle.

One Reply to “A letter arrives from Mr Zapatero…”