I was lucky enough to win something that wasn’t the premium bonds – Chris Marshall’s “comment of the month” competition!

Now Chris is not just an all round nice chap, he’s also the second (or eighth, depends how you work it out!) most popular chap in Spain according to Twitter.com. He moved to Almerimar quite a few years ago now with his all round decent egg wife Sands (who spends her spare time neutering cats). Chris is one of the writers, and Almerimar special reporter, at The Reader, Almería´s newest and best newspaper.

Each month, together with his network of friends in Almerimar, he gives away a couple of meals in local restaurants. I won it for a drunken tossaway comment which you can read here; Chris claims it was the funniest comment of the month, I contend that it was just that his blog doesn’t get as many comments as mine, so he has to take what he is given. 🙂

So up I roll, together with the GF (to whom I pretended this was a romantic day out instead of a freebie). We met up with Chris and Sands at Mac Gowen’s, the only place in Almerimar to do a decent pint of Guinness and a curry. It’s run by Paul, a genial Irishman who has a sister who lives up in Bédar.

Here’s a picture that was taken: 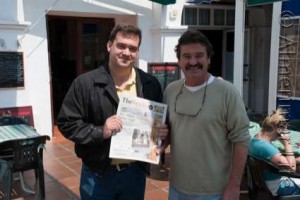 (One is me, one is Paul – but I’m not going to say who is who! The newspaper is the first issue of The Reader.)

I had a fantastic hamburger, which was the special that day. It’s been a long time since I had a hamburger that good. It’s not something I would normally have, but Paul was so insistant I try it that I did and I’m glad I did. The GF had the chicken with mushroom sauce and veg, and she too (another fussy eater) cleaned the plate. The curry there is damned good and Paul is right to be proud of it. He doesn’t do a lot of curry, but he cooks up the occasional dish that goes down right.

We also sampled some tapas there, and a couple (ah-hem) of glasses of wine. Chris had warned me that he was off the booze for a couple of days, but we soon changed his mind.

Now, I’ve been down to Almerimar to see Chris before, and sadly I’ve never written about it because it’s been a bit hazy the next day.  It’s a lovely place in the middle of a sh**-**le (El Ejido). Good restaurants, good bars, lovely people and a wonderful marina. It’s worth a trip – check out almerimarlife.com before you go.

Oh, and here’s the writeup Chris did (link).

4 Replies to “Crikey, I won something!”