Modesto Francisco Lopez Ortega is the promotor who can be seen in this infamous video giving the corrupt mayor of Ohanes (a small village above Almeria) 30,000€ for a building license. After falling out with the mayor, he handed over the video to the Guardia. The Mayor (now ex mayor), who was allowed by PSOE to resign “with dignity” from his post and his membership of the party (early retirement, apparantly; going to spend more time with the inmates at the local jail) is now on trial charged with abuse of power, accepting and requesting bribes and fiscal coercion. PP is using this case as ammo in it’s war against the PSOE, arguing that it shows that both sides have rotten apples and it’s not fair that Garzon is just concentrating on them. 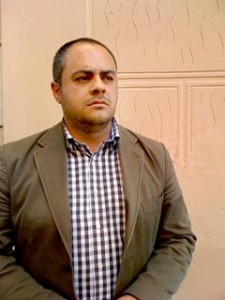 Modesto gave an interview to La Voz de Almeria explaining why he shopped Mayor Juan Francisco Sierra. Modesto owned a company called “Menjemor Promociones y Desarrollos Turisticos S.L.”, which has built since 2001 some 200 homes in the area around Ohanes, 108 of them before 2005. It seems that of the last 25 homes he built, Mayor Juan Francisco refused to give him the occuptation license for over 11 months, something that ruined the businessman.

In the article, he claims that several years ago the mayor “suggested” that he might be able to speed up the planning process in exchange for a bit of cash. Paella I think they call it. Over time, the demands became more extravagent; he claims that the mayor at one point asked for a house” at cost” (no news on if he got it).

It got to the point, he claims, when he was unable to pay the mayor and in exchange the mayor refused to give him the licenses – this, together with the crisis, forced him into insolvency.

He also claims, a point that has been picked up the P.P., that at one point he made an “unofficial” complaint to the PSOE party in Almeria, but was met with an attitude of “yes… we know… so what?”.

This little case promises to roll on…. the ex-mayor is expected up again in front of the beak tomorrow at 10am. “Justice”, says Modesto, “will have the final word”.